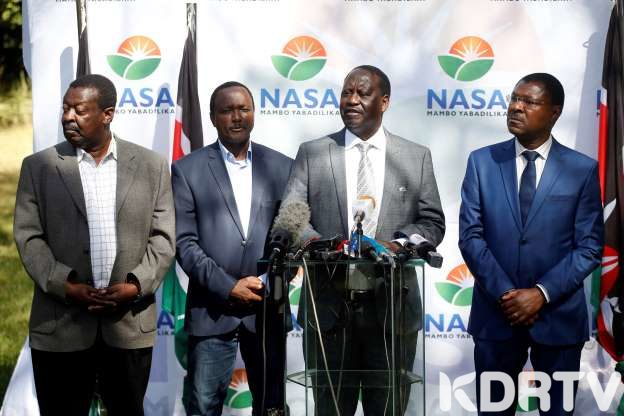 KDRTV NEWS: Wiper Party Leader Kalonzo Musyoka has said that he “would be the most stupid fellow on earth to go and support — for the third time — a presidential candidate (Raila) without a measure of reciprocity.”

The Wiper chief said that he will not support the presidential bid of Raila Odinga in 2022.

Kalonzo said that Raila Odinga betrayed other co-principals and led to the fallout in NASA.

The Wiper leader reiterated the statement made by ANC party leader and co-principal in NASA Musalia Mudvadi.

Mudavadi said that NASA cannot survive from his sickbed since there are several instances of mistrust.

This is despite the fact that President Uhuru Kenyatta challenged the NASA co-principals to united so that he can back one of them in the 2022 polls.

Kalonzo made the declaration while he was speaking during an interview with NTV.

“For me, as of now, it is unthinkable that I, Stephen Kalonzo Musyoka, would support Raila Odinga for the third time…. I would be the most stupid fellow on earth to go and support — for the third time — a presidential candidate without a measure of reciprocity,” said Kalonzo.

The Wiper leader also accused the ODM party of killing NASA alliance during a by-election in Kibra where he recalls that its Secretary-General announced that the alliance was dead.

“The ball is in the court of ODM because they are the ones who killed it (NASA) during the by-election in Kibra when their own Secretary General announced that NASA is dead. The rest of us said it is not dead and it is still there on paper. It would take a miracle to rebuild that confidence,” said the Wiper leader.

He either insisted that any political negotiation between him and Mr. Odinga will occur under the new-born One Kenya Alliance unites Musalia Mudavadi (ANC), Kalonzo Musyoka (Wiper), Gideon Moi (KANU), and Moses Wetang’ula (Ford-Kenya).

The declaration by Wiper Leader came even after Raila confirmed that he and Kalozno Musyoke can’t part ways.

The new political developments have emerged after President Uhuru came under criticism from his allies after he hinted that he will back a NASA principal if they unite.

Subscribe to watch latests videos
In this article:Headlines, NASA