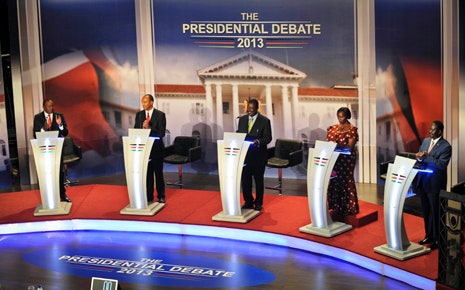 The first presidential debate will be held on July 12, 2022, the Kenya Editors Guild has announced.

The second debate, according to KEG president, will be held two weeks later on July 26. In between the two, there will be debates for presidential running mates.

READ ALSO: Kibaki Never Complained About Me- Kalonzo Tells Ruto To Resign Because He Has Been A Bad DP

Otieno was speaking in Mombasa at the media stakeholders workshop with the IEBC.

“…and proceed to mount election training across the country to prepare ourselves for the assignment,” he said.

“…and empower journalists to interrogate issues, to seek information, and safeguard their role in society as frontline human rights defenders.”

FIRST PRESIDENTIAL election debate to be held on July 12, 2022 and second one on July 26 ahead of August 9 poll, Kenya Editors Guild says. via- @NationBreaking #KenyaDecides

Otieno said they will design a plan for media to empower citizens to fully participate at each stage of the electoral process and thereafter as a right.