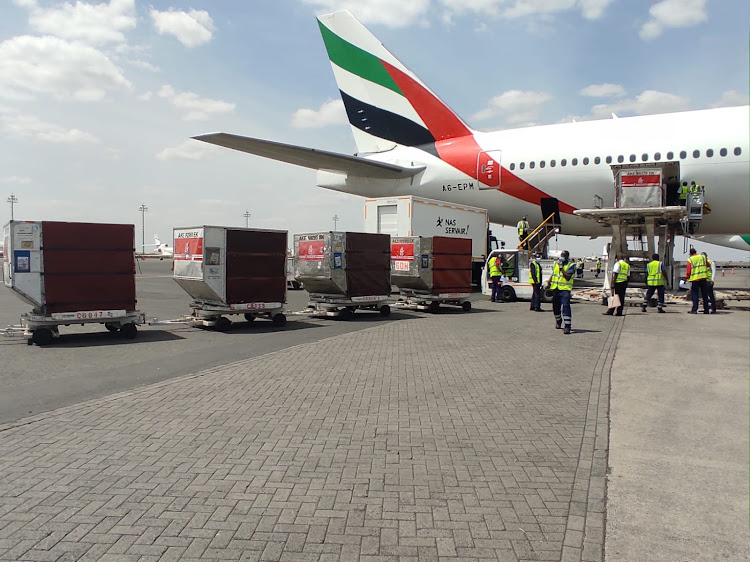 KDRTV NEWS: Kenya has made a significant positive step in enhancing the battle against the coronavirus pandemic.

The country on Sartuday July 31 received a consignment of 410, 000 AstraZeneca doses from the UK.

The addition of move vaccines is expected to beef up Kenya`s fight against the pandemic.

The CAS thanked the government of the UK on behalf of Kenya.

“Our capacity for vaccine deployment remains robust. As is common knowledge our efforts have been greatly affected by supply constraints. When we receive donations like these from friends and well-wishers, it’s a deserved shot in the arm for our vaccination efforts,” Mwangangi said

President Uhuru Kenyatta had announced that his administration is working round the clock to vaccinated at least 10 million Kenyans before Christmas this year and 26 million people by end of next year.

Kenya is also expecting receiving 1, 760, 000 doses of Pfizer from the government of the United States.

The arrival of the UK doses happens when President Kenyatta is meeting UK PM Boris Johnson in Britain.

President Uhuru Kenyatta is on his three-day trip to London to discuss the funding of global education as well as negotiating with the UK government of areas of common interests with the government of Kenya.

For instance, qualified Kenyan medics are now cleared to work in the UK.

However, the positivity rate has slightly reduced from 18 percent to 15.6 percent on Saturday.

This comes a day after the Ministry of Health reviewed curfew hours in the Nyanza and Western province which will now start at 10 pm and end at 4 am just like the rest of the country.