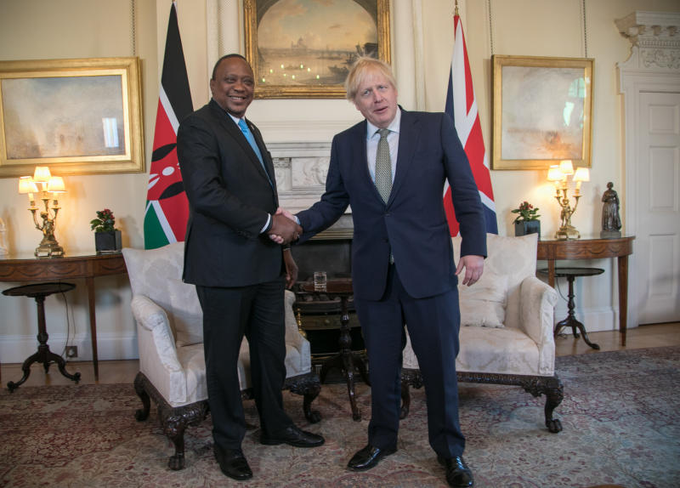 According to our early reports, the president is expected to be in London for three days and co-chair the summit alongside PM Boris Johnson.

The President is also expected to announce new strategies to strengthen the diplomatic relationship between Kenya and Britain.

However, President Kenyatta and his Kenyan delegates were forced to undergo the Covid-19 test before flying out of UK on Tuesday, July 27.

However, Britain has defended the move saying that it was keen on protecting its PM Boris Johnson and the members of the royal family who have been lined to meet with President Uhuru Kenyatta.

The new developments have emerged as Kenya, and other nations have continued to be in the UK Red List Alert.

The UK had also banned Kenyan citizens from traveling into the country to halt the spread of the pandemic.

“The whole delegation took Covid tests and were exempted from quarantine.

“The tests were mandatory for everyone in Uhuru’s delegation, including the President, ahead of the UK trip,” said a UK official.

KDRTV established that the group was forced to be subjected to Polymerase Chain Reaction Tests (PCR), which is used to detect early symptoms of Covid-19.

President Uhuru Kenyatta had been vaccinated with the Astrazeneca vaccine in March 2021 at a statehouse in Nairobi.

KDRTV had established that people being declared Covid-19 negative before leaving their countries and testing positive in Europe is common.

The President, who will be in London for three days, will co-chair the Education Summit will is expected to raise USD5 billion schemed to enhance the paradigm of education worldwide.

The President is also expected to make announcements on multi-million deals linked to his big four agendas.

Later, the President will grace an event at West London`s Kew Gardens to celebrate Kenya-UK Year of Climate Action and Kenya Leadership on climate change in Africa ahead of COP26