Most Kenyan politicians are known to drive luxurious cars on Kenyan roads. However, they not only flaunt on roads with their cars but also, fly expensive choppers. Owning a chopper can be very expensive because a chopper on average might coast you over 150 million Kenyan shillings. Additionally, it also has an insurance that will cost you up to 8 million Kenyan shillings and uses up to 30,000 shillings worth of fuel per hour.

Nonetheless, a number of politicians own not one but more than one choppers.

Ruto is arguably one of the richest politicians in Kenya. He is a proud owner of several choppers. Here is the list of those choppers and their price. 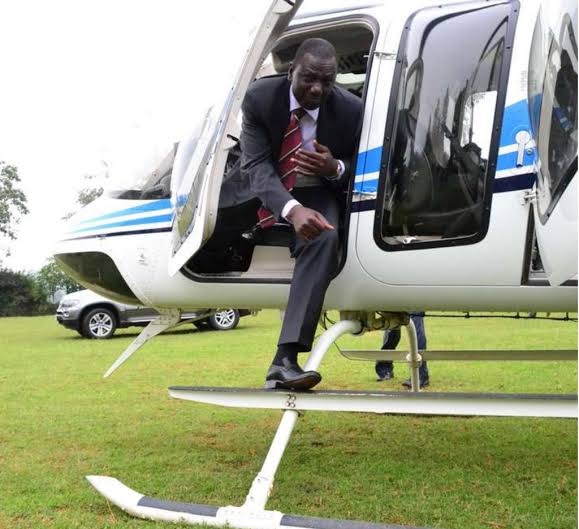 Peter Kenneth is a Kenyan politician. He is also the former minister of finance and first elected Gatanga MP. He is also a banker by profession. Kenneth is a proud owner of three choppers. The Bell 407, 5Y PKI and 5 Y PKZ.

Maina was elected as Mathira member of parliament in 2007. Maina is the owner of Kitinyaga Constraction owning two choppers. His had the fastest single engined  helicopter. It is estimated to be 300 million Kenyan shillings.

The two choppers are 5Y PSM and 5Y MNW.

William Kabogo is former Kiambu governor. His net worth is estimated to be billions of Kenyan shillings. He made his wealth through import business. He owns Eurocopter A5350B3 and 5Y EXK. Gideon Moi, son to the late Daniel Moi is also a proud owner of four choppers. He owns a palatial home with a helipad in his compound. The four choppers are Eurocopter AS 350B2, 5Y ZKL, Hughos 300 and 5Y ZKM.

He joins the list of Politicians with more than one choppers.

Jimmy Owns two choppers. He is one of the most successful business persons and also a politician. His choppers are the Eurocopter EC 130 B4 and 5Y JWJ.