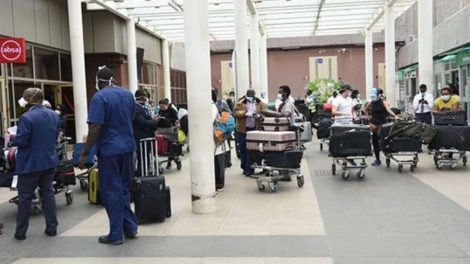 At least 10,000 Kenyans are currently stranded in Nairobi as they seek alternatives on how they can travel to Arabian countries to work as unemployment in the country bites.

Despite the many complaints of the harsh conditions related to working in these Arabian countries, Kenyans are still fighting to secure jobs there.

According to the Association of Skilled Migrant Agencies of Kenya (ASMAK), three cohorts of trainees graduated from the National Industrial Training Authority (NITA).

The agencies which act as intermediaries have failed to secure discounted tickets for them to fly abroad.

READ ALSO: Married Gospel Artist Reveals How He Slept With Church Women: I Was Making A Lot Of Cash

“What this has done is create a backlog of about three cohorts of graduates whose visas have been processed and contracts signed but are yet to report to work,” ASMAK chair Francis Nduhiu told Daily Nation.

ASMAK further revealed that Kenyans in Saudi Arabia whose contracts expired have also been unable to return who since because of lack of discounted flights.

“The flight challenge has resulted in long delays of the migrant workers especially domestic workers,” Nduhiu said in a letter.

Government revealed that they are currently working to solve the issue and are fully aware that Kenyans in these foreign countries are being mistreated.

He has directed the 420 agencies to stick to the license agreement with immediate effective.

“We are now in the final stages. These are part of activities I intend to finalise when I visit Saudi Arabia, possibly within the next 30 days.”