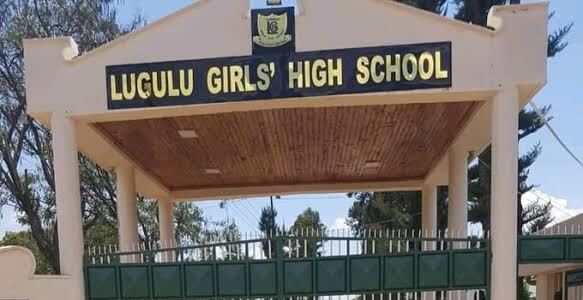 (KDRTV) – When students of Lugulu Girls took to the streets last week to demonstrate over an alleged rape incident they accused their headteacher of trying to cover up the incident.

The angry students, who walked for more than 6 kilometers from the school to Webuye Town, claimed that the Principal, Mrs. Dina Cheruiyot was aware of the incident but did not want to report it to the police because it would soil her name.

In the students’ own words, Mrs. Cheruiyot had said she would not report the incident because it would destroy her chances of winning the coveted Principal of the year award.

Their complaints to the Webuye OCS.

Mrs. Cheruiyot further warned the learners who witnessed the incident that she would send them to jail if they say anything. The school was later closed indefinitely over the incident.

Well, it has now emerged that the school has sent some five support staff on compulsory leave over the rape incident. The staffers are accused of inciting the students to demonstrate.

“We are wondering why we have been sent home yet the students were demanding justice for one of them who was defiled,” one of the staffers said in an interview with the Nation.

In Bungoma, the community has also accused Ms. Cheruiyot of high-handedness in the way she is running the school.

Tempers Flair as Senator Cheuiyot Destroys Poghisio in the Senate

The Principal is not fresh to controversy. In 2016, she was on the spot for expelling eight girls at Moi Girls High School Kapsowar, the reason being they were pregnant.

The Ministry of Education had to intervene before the girls were returned to school.