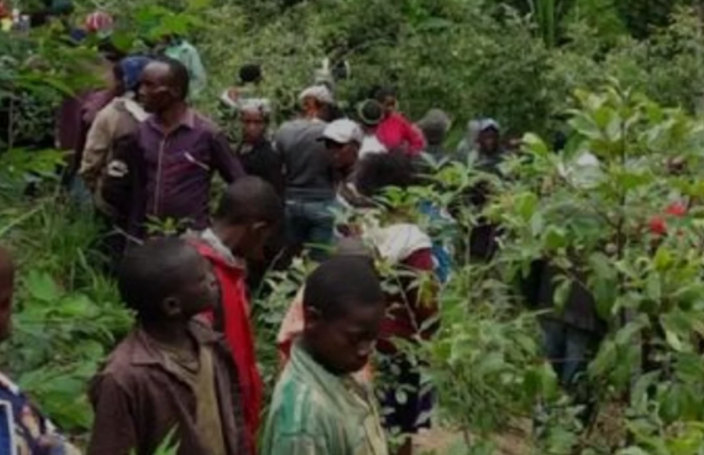 A family in Kathima, Kiegoi in Igembe South was thrown into a celebratory mood on Sunday, June 13 following the death of one of their kin lynched by an irate mob.

Jadiel Kaberia was killed by the mob after trying to kill his mother. According to the family members who had grown tired of him, Kaberia had just been released from prison having killed his wife, child and 60-year-old father.

“We are very happy as a family and being mother, I decided to host a celebration ceremony today because my son was like a devil. In fact, I am very happy for his death because he wanted to kill me, his two other children and his three siblings,” she said.

The celebrations, she promised, will go on for a week following the death because the family has finally found peace.

“I am thanking the villagers who came to my rescue and killed him. We are now at peace,” she said.

“Before he was arrested, he kept on threatening us claiming that we did not love him even after allocating him a large piece of land with tea plantation that was attracting good income to him. He went ahead and attacked his father with a knife killing him on the spot as we scampered for safety that fateful day.”

Uhuru’s Adviser: Jubilee MPs Are On Their Own, Uhuru Has Moved On

Kaberia was a hardcore criminal accused of raping and killing women in the area according to Elosy Wanja, a grandchild in the family.

Villagers also shared they’ll finally have peace now that the 30-year-old father of two is dead.

“The village is finally at peace. Women could not go to the market or shambas alone and even school going girls needed to walk in groups because this man was a dangerous one,” Bernard Kimathi a neighbour said.

“I tried to talk to this man to repent and go to church so that the society can accept him back but instead he laughed it off and said he was out to kill ten more family members,” added Ken Mutwiri.

Subscribe to watch latests videos
In this article:Kenyans,Meru,Meru County,Mob killings