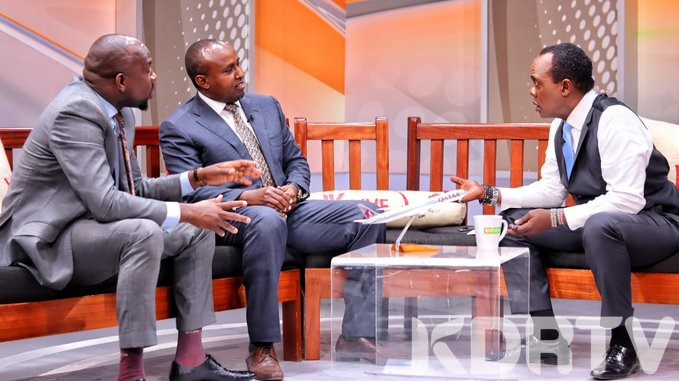 Koinange hosted the two politicians who are allies of political rivals Raila Odinga and Deputy President William Ruto on his famous JKlive to discuss the alleged plan to impeach Ruto and the DP’s claims that his life is danger.

However, Moses Kuria claims that the journalist was biased and acted as if he was representing ODM in the discussions. In fact, according to Kuria, Junet did a better job as a moderator in  the interview between Jeff Koinange and Murkomen.

“Rarely do I agree with Junet Mohammed but I think yesterday he did a superb job moderating the debate between Jubilee’s Kipchumba Murkomen and ODM’s Jeff Koinange. kudos wuod Suna,” Kuria said on Twitter.

Rarely do I agree with @JunetMohamed but I think yesterday he did a superb job moderating the debate between Jubilee’s @kipmurkomen and ODM’s @KoinangeJeff . Kudos Wuod Suna

He also accused Ruto of trying to outdo his boss, which claimed it was gross insubordination.

” The Deputy President is all over speaking and shouting more than the President, you may think there is no President in this country. That is gross insubordination,” he said.