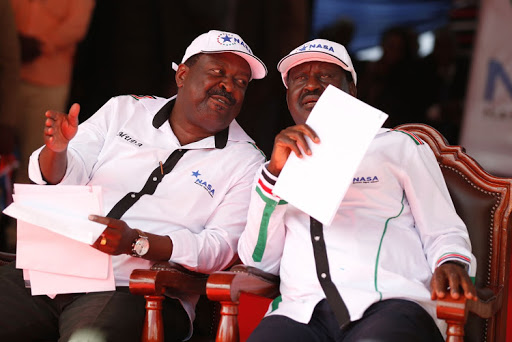 Amani National Congress (ANC) boss Musalia Mudavadi is not planning to work with Raila Odinga again stating that he doesn’t trust him.

Speaking at the coast where he had gone to campaign ahead of 2022, Musalia said that there are no plans to revive the National Super Alliance.

“We have a very serious deficit of trust in Nasa. In fact, maybe it is irredeemable,” said Mudavadi.

Kalanzo over the weekend warmed up to the idea by pledging unity after Raila dropped the hint at the burial of former Kibwezi MP Kalembe Ndile.

Mudavadi shunned Raila for misleading Kenyans that they are in talks to revive the 2017 coalition.

Mudavadi has supported Raila twice–2007 and 2017– in his presidential quest.

Mudavadi said Raila also should stop misleading Kenyans into thinking he was the brains behind the coalition.

“Why push a narrative that so and so cannot achieve anything unless they work with you?” he explained.

“If you want to take us back, you must accept there is a trust deficit. How do you expect us to trust you when you say you want to be in a coalition with us?”

Mudavadi, a former vice-president, has appeared to warm up to Gideon Moi, Kalonzo Musyoka, and Moses Wetangula in a bid to form an alliance that will propel them to the presidency.