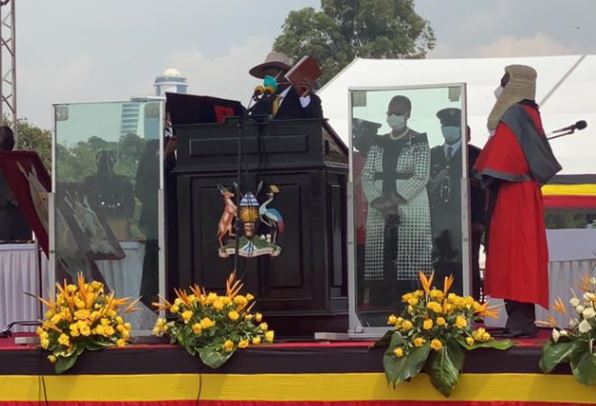 Uganda President Yoweri Museveni was on May 12 sworn in for his sixth term which will see him rule for four decades.

Museveni, in the event that saw 11 heads of state attend including President Uhuru Kenyatta attend, was sworn in amid claims of human rights abuse.

His administration has been accused of silencing the opposition by arresting his competitors.

During his speech, however, Museveni took a dig at other leaders who have accused him, saying he understands democracy.

“It is therefore quite comic and laughable to hear of some actors in the world giving us lectures about democracy. You give me a lecture about democracy… where are your credentials?” he said.

Museveni also suggested that Ugandan democracy was designed by them and people should stop criticizing.

“We designed this system, not from air-conditioned rooms, but from the jungles of our country where we lived with the people,” he said.

Museveni comments came as his biggest rival Bobi Wine, real name Robert Kyagulanyi claimed he had been confined in his house ahead of the inauguration.

The 39-year-old said on Twitter that he was surrounded by the army and police to prevent him from leaving his house.

“The military and police have yet again surrounded my residence, as Gen. Museveni prepares to illegally swear himself on this Wednesday! The coward is fully aware that he’s illegitimate, and that’s why he’s very scared of the people. Hang in there comrades. We shall overcome,” he tweeted.

Subscribe to watch latests videos
In this article:Museveni, Uganda