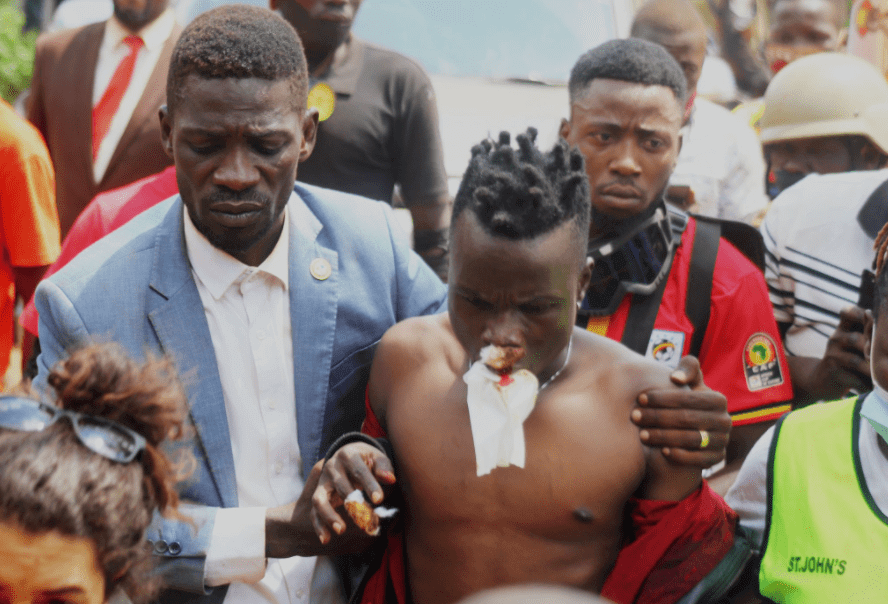 (KDRTV)-Police in Uganda have recapitulated brutality on the opposition leaders and supporters as presidential campaigns intensify.

The report was unveiled by a spokesperson for Bobi`s party on Tuesday.

The development is the latest in the country`s savageness on the opposition as they aim to terminate the longstanding rule of President Yoweri Museveni, 76, in the election scheduled for Jan 14.

According to Joel Senyonyi, who is the spokesperson for the National Unity Platform (NUP) reported that the rubber bullet hit Daniel Oyerwot as he sat with Wine in his car that was part of a convoy

Wine supporters were heading to campaign in Kayunga district, about 65 km (40 miles) north of the capital Kampala.

“He was shot with a rubber bullet, he has lost some teeth and his mouth is torn,” Senyonyi said.

The military & police yet again attacked us in Kayunga! They've shot and severely injured several team members including my producer Dan Magic & a police officer attached to me, ASP Kato. Many in a critical condition. Nearby clinics being teargassed. Pray for us. Pray for Uganda pic.twitter.com/7hBq4ZtKcc

Bobi Wine said that his supporters tried to move to a different venue in Jinja in eastern Uganda, but security personnel had blocked him and shot and blown his car tires.

Wine also added that another bullet shattered his car`s windscreen, punching a hole in the screen.

In November, 54 people were killed during a clash between Museveni`s police and opposition supporters in various locations in Tanzania.

President Museveni has been faulted for the police harassment and brutality bestowed on the opposition supporters.