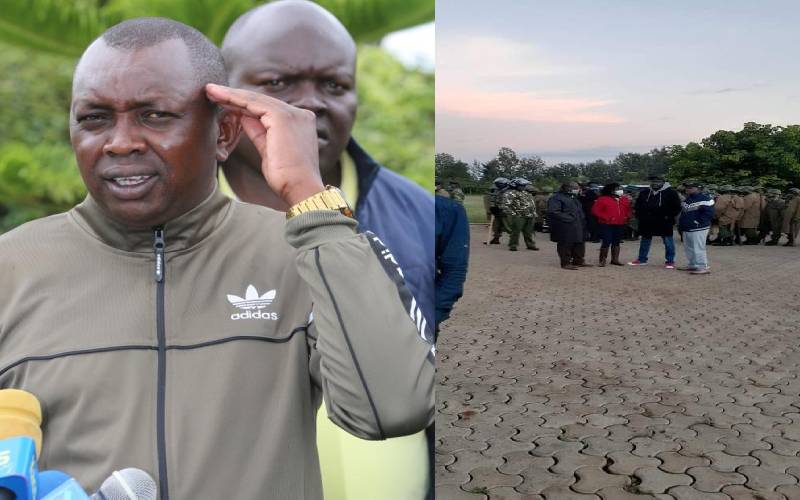 According to reports, residents blocked the road leading to Sudi`s home with logs, stones, and tractors to halt police efforts to arrest the controversial lawmaker.

KDRTV understands that tension was high during that night as tens of police surrounded his home to arrest him.

According to the Standard, residents armed with bows and arrows blocked the road leading to the Kapseret`s MP with logs, trees, tractors, trailers in a bid to stop police from accessing his residence

Reportedly, all lights were switched off as senior police officers pleased with the lawmaker to surrender

The supporters protested why the police did not arrest the MP during day time however, the Uasin Gishu police commander Johnstone Ipara leading the operation was allegedly under a directive to arrest the lawmaker at night

Sudi`s lawyer Isaac Terer who spoke to media on Friday night pleaded with the officers to make the arrest in the morning since the tension was already high that night.

“There is serious tension here which might lead to breach of peace. We are asking police officers here to do this arrest in the morning,” Terer Said.

“We are asking the independent institutions to act independently and in a civil manner. We are able to submit Sudi any time but not at night,” he added.

READ ALSO: You Can Fire All Kalenjins in Govt – Oscar Sudi Dares Uhuru

He added, “Sudi is willing to abide by the law. Why should we have the police manning his compound? It’s not necessary. I don’t want to read politics but the police should act in a civil manner.”

However, after four hours, the police finally managed to break into the MP`s home on Saturday morning but failed to arrest him