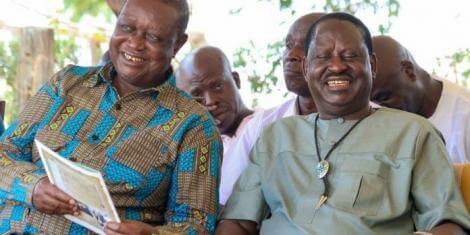 (KDRTV) – East African Legislative Assembly (EALA) MP Oburu Odinga has claimed that the controversial claims made by Muranga Senator Irungu Kang’ata, in a controversial letter to President Uhuru Kenyatta, could be a signal that someone wants to betray Raila Odinga.

The ODM leader has been the face of the BBI report which seeks to change the constitution through a referendum. The referendum is slated for June this year.

However, Kangata has warned President Uhuru Kenyatta that the BBI will be hard to sell in Mt. Kenya as the report is only supported by 20% of residents.

Oburu, the elder brother to the former Prime Minister, has read malice in Kangata’s letter and claimed that it could have been an indirect message to the ODM leader about a looming betrayal. He warned Kang’ata that this will not work and they (the ODM camp) are ready to drop the BBI report.

Hon. Kang’ata We know someone want to short change Raila.

And he is using you to communicate a message to Raila. Do…

“Hon. Kang’ata We know someone wants to short-change Raila. And he is using you to communicate a message to Raila. Do not think Raila is dying for that BBI thing. We can drop it before you do it. We are not fools as you think,” Oburu said in a Facebook post.

Meanwhile, at least 10 governors drawn from the Mt Kenya region held a press conference on Monday, where they dismissed Kang’ata. The county bosses drawn from Central Region Economic Block (CEREB) accused Kang’ata of mischief and warned that the sentiments are his own personal views and are not representative of what is happening in the region.
Read Also: Raila Will Only Retire After Becoming President – Oburu
“All Governors attest that wananchi are waiting for the published bill. To intimate that the Mt Kenya region is opposed to the document at this stage is not only preposterous but also a serious misrepresentation of facts and reality, and we repeat very premature,” they said in a statement read by Nyandarua’s Francis Kimemia.
Subscribe to watch latests videos
In this article:Oburu Odinga,Senator Irungu Kangata