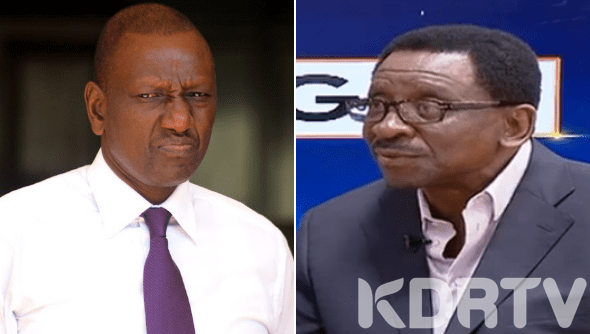 (KDRTV)-Siaya Senator James Orengo has hit out to the Deputy President William telling him to clear his name from the ex-Cabinet Secretary Rashid Echesa`s military scam with foreign investors.

There are allegations that the former CS brokered a fake and illegal deal of Ksh. 39 billion in his Harambee offices

“The office of the Deputy President has become a crime scene, with people getting into his office masquerading as army generals, that is very strange,” Orengo said.

However, KDRTV has confirmed that on Saturday, the Deputy President made a social media post distancing himself from the allegations that his office was involved in the military equipment scandals with some foreign investors

According to Ruto, it is his political nemesis who linking him with the scam

“The desperation of my political competitors on their choreographed smear campaign against WsR is evident even for fools (whom we have a shortage for)to see. Just wait and see where this will end up. Washindwe! Go for the fraudsters. Leave me to serve the nation,” wrote the Deputy President

However, a post surfaced a daily paper described the besieged former CS as a close ally to the deputy president and describing the office of the Deputy President as ‘citadel for fake deals’

Rashid Echesa was arrested on Thursday by detectives of the alleged Ksh. 39 billion face military equipment with foreign investors

Echesa will spend the entire weekend at the Muthaiga Police Station

The allegations have it that the former sports CS used the name of the office of the president and the signature o the Defense Cabinet Secretary Amb. Monica Juma to facilitate the multi-billion shilling deal