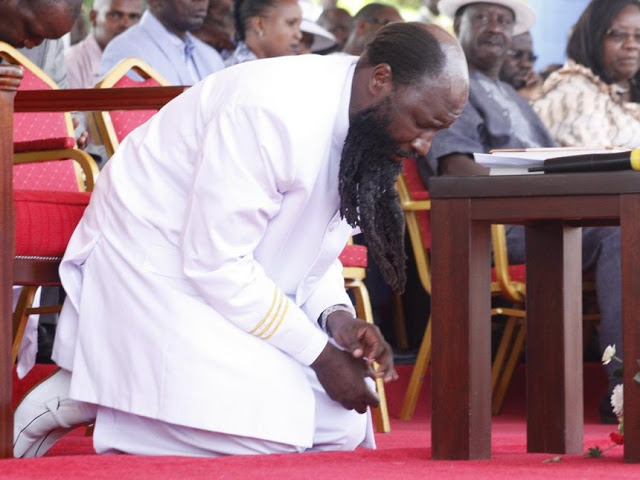 (KDRTV)-Prophet David Owuor of Repentance and Holiness Ministry has very staunch followers who are willing to do anything for him and his church.

Some of the doctrines in his church are so controversial to the existent that he has been accused of brainwashing his followers.

The source of his wealth is also questionable because he doesn’t even accept offerings but his followers argue that they are the ones who fund his activities. His followers wash streets before he arrives at a function because God is pure and never enters filthy spaces.

Pastor Owour has never held a live sermon in church, he does so through his radio and recordings. Other sources indicate that he never reads any bible scriptures, something we cannot confirm at the moment

His prophecies have always failed him because they never come to pass. He caused much controversy when there were claims that he resurrected a woman who eventually died a few days later.

As if that was not enough, the repentance holy ministry has done it again by warning his members against watching movies.

The leaked memo which was circulating in Whatsapp groups was sent to his followers and it listed the type of content they should not be watching on their television sets.

READ ALSO:Prophet Owuor Exposed Once Again For Doing This To His Followers

Apart from the content on television, he also touched on various issues that he considers a sin like wearing mini skirts and tight trousers. The controversial pastor banned his followers from drinking wine and dating

Some of the movies that members have been cautioned against include soap operas, action movies, and bongo movies. Kenyans online are though, wondering which scripture in the Bible states that watching movies is a sin.

This has caused a storm online with a good number of his non-followers calling his church a cult, claims that his followers did not take kindly

Here is the memo that has caused a storm online;