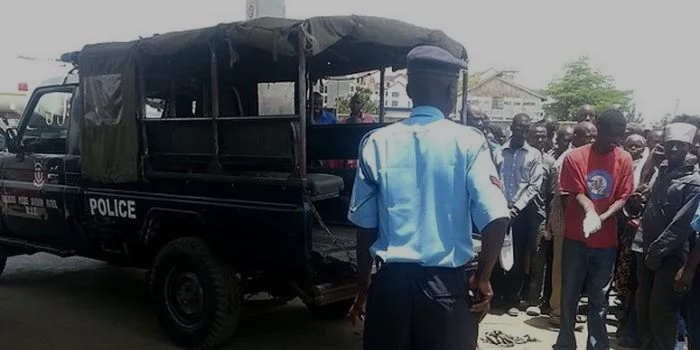 A police officer in Njoro on Monday 23 committed suicide at Njoro sub-county Hospital after shooting dead his girlfriend admitted at the facility.

Constable Bernard Sivo shot dead his girlfriend, Mary Nyambura, 29 after storming the hospital and shooting her 10 times before turning the gun on himself.

According to report, Nyambura had checked in the facility with a broken leg after an ugly fight with Sivo at home after Sivo, 28, beat her and broke her leg.

After the woman went to the hospital, word reached the officer that she was getting treatment at the hospital something that might have irked him.

He stormed the facility at 1 am carrying an AK 47 and got her in a ward getting medical care. He ordered everyone out and sprayed her with bullets while she was still lying on her bed.

The attacker escaped the hospital and went to the local police station while shooting in the air.

He later shot himself in the chin and the bullet exited in the forehead, police said.

A team was mobilized to go and disarm him in vain. They found his gun at the police he committed suicide.

According to his colleagues, Sivo, who was on duty then, excused himself saying that he needed to make an important phone call and went outside the office with a fully loaded AK 47.

Nakuru police boss Beatrice Kiraguri said they are yet to establish the motive of the incident.

The killing joins a string of others from police officers who have been committing suicide at an alarming rate.

As part of efforts to address the menace, the National Police Service Commission has commissioned a counselling unit and recruited personnel to be talking to the police.

Subscribe to watch latests videos
In this article:Kenyan police,Police killings