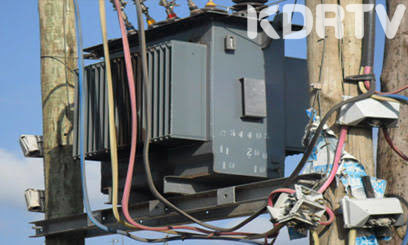 It is still a paradox how thugs vandalised transformer aroundd Kibaki’s home and stole its components.

It is not clear yet how thugs managed to steal the transformer and its components despite the area being under tight security.

However, it is believed that the thieves took advantage of the plantations to hide as they eluded with the parts.

According to Kenya power distribution engineer in Othaya, Benjamin Onsomo, the electricity was cut off on Tuesday around 11 pm.

However, the KPLC acted swiftly and soon the power was restored in some parts. “We had to connect the affected houses to a feeder line at Othaya Sub-Station, which serves the town centre and its environs. As a result, power was restored, though temporarily, the following day (Wednesday, May 4) at 11am,” said Onsomo.

Also read 25 Years Each for Vandals of Kenya Power Transformers.

Nonetheless, this is the first ever incidence to be reported this year. “The thieves usually target the transformer components, particularly the copper inside the device,” said Onsomo.

However, the neighbours said that the thieves took advantage of the heavy rains in the area. During the investigations, an umbrella was recovered. This suggested the thieves were ready to the task.