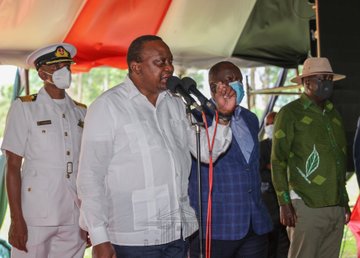 Speaking at the Kisii State Lodge on Wednesday, the President questioned why they were insulting Matiangi yet he had given him a job coveted by so many people.

The President gave a Ksh 3 million token to the boda boda riders and promised that he will be back for a major Harambee if they register a sacco.

He also gifted a 62-sitter bus to Shabana Football club.

President Uhuru Kenyatta has donated a 62-seater bus to Shabana FC. The bus was requested by Kisii leaders during a recent meeting with the Head of State at State House, Nairobi. pic.twitter.com/zEHBREGyRC

Uhuru, accompanied by ODM leader Raila Odinga and other national government leaders also visited the nearby Nyamira county where he commissioned the construction of Chebilat-Ikonge-Chabera Road. When complete, the road will open up the region for business.

We were privileged to host H.E. President Uhuru Kenyatta & several national leaders in Nyamira County. The Head of State officially commissioned the construction of Chebilat-Ikonge-Chabera Road, which will increase accessibility of the County & advance GoK's development agenda. pic.twitter.com/F5dFDNQp8P

Matiangi has been on the receiving end of insults from a section of politicians in the region.

Read Also: Raila is Ready to Pass the Mantle to Matiangi

Last week, a group of youth demonstrated in Kisii demanding for Deputy President William Ruto and his allies to respect the CS. This was a day after the DP had visited Nyamira for two harambees. The Tanga Tanga group accused Matiangi of blocking the fundraiser a week earlier.