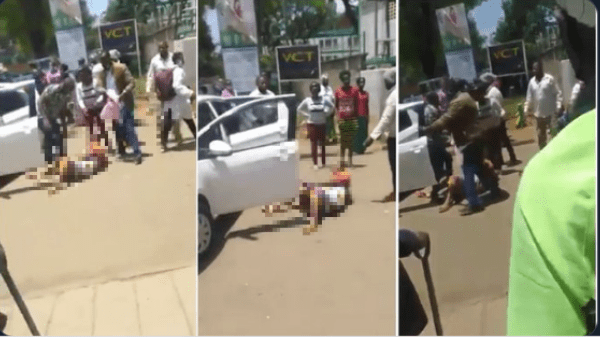 (KDRTV)-Pumwani hospital is on hot soup after an after a video emerges on social media showing a woman allegedly delivering at their gate, uncovered on the pavement of scorching sun

Even though KDRTV is yet to dig deep into the story, in the video a group of people who seem to be agitated are protesting at the facility`s gate.

Reports intimate that currently, the facility has little activities that go own and appears to be deserted.

Several people could be heard in the footage asking the hospital medical staff to intervene in the situation amid allegations that the woman had been turned away by the hospital.

KDRTV notes that services at various county facilities have been halted by a shutdown on county governments informed by the stalemate’s revenue-sharing formula earlier in the week.

Health service providers across the country have downed their tools, citing delayed wages and allowances.

On Saturday, Kenyans took to social and stood with the woman initiating the hashtag #respectourmothers hitting out to the hospital.

“Ng’ombe mbili zikipigana, nyasi huumia.While senate & Governors are busy fighting, women who expect services from hospitals like Pumwani are being turned away, this is not acceptable Not in 2020 Imagine when citizens have to fight to get services at a Government hospital,” Syombua A Kibue captioned the video on Twitter.

Here are some reactions:

This is so disturbing.
While the government is having inner wars , our mothers are dying because they can’t get a simple service like giving birth. We are becoming statistics in the eyes of our greedy politicians.
This is happening in 2020. Pumwani Hospital. Wajinga Nyinyi.

Watched disturbing video of a pregnant lady outside Pumwani MATERNITY hospital. I don’t have all the facts, but it’s painful to watch! She is a mother yet I doubt we will see helicopters and demonstrations for this mother, we may not even hear one leader speak. SAD!

KDRTV understands that the hospital has not released any statement; however, Nairobi Woman Representative Esther Passaris on Saturday transpired a week ago.

Passaris, who did not deny that the facility sent away the mother, said that she was later assisted.

Pumwani Hospital informs me that the incident took place a week ago, and that nurses eventually attended to mother and baby who are currently doing fine. It's imperative that gaps in our healthcare systems are sealed, starting with grievances that lead to go-slows. @Senate_KE