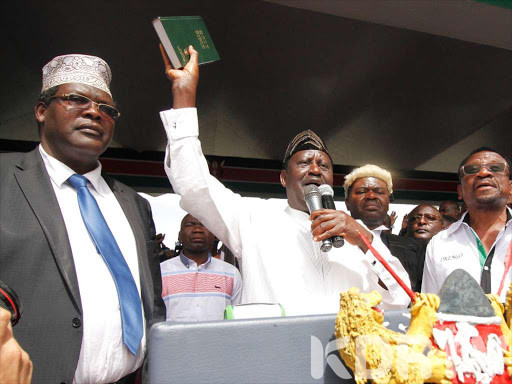 Miguna’s attempt to return to Kenya was dealt a major blow when Germany Authorities prevented him from boarding a Kenyan bound flight at the Frankfurt Airport on Tuesday.

Speaking to a local radio station, the controversial lawyer said that there was a red alert placed on his head by the Kenyan Government. The alert meant he couldn’t board a plane to Kenya or another African country.

“Lufthansa flight manager is saying that the Government of Kenya must send official communication to Lufthansa at Frankfurt office before I can be allowed to fly to Kenya or any other African country.”

But Alai has said the decision to block Miguna was made by Raila. He said Raila had intimated to his close associates that Miguna will only come to Kenya when dead.

“Raila swore recently to some of his close associates that will only come back to this country when he is dead. Someone told me about this last week,” Alai tweeted last week. The blogger was responding to reports that President Uhuru Kenyatta had allowed the controversial lawyer back to the country.
Alai said Miguna had touched Raila’s nerve with some of the things he had written about him on social media.

See the red notice on @MigunaMiguna?

I told you that @RailaOdinga swore that Miguna will land in Kenya only when he is dead. You thought it was a joke. Some things he wrote about baba online touched a raw nerve. https://t.co/QmfDT8WXuM

Miguna was deported in March 2018 after he had controversially sworn in Raila as the People’s President at Uhuru Park. He later accused the former Prime Minister of engineering his deportation to silence him. President Uhuru Kenyatta has also not been spared in these attacks.

He has also made wild allegations about the paternity of Raila’s children, claiming that the ODM leader may not have sired any of them.