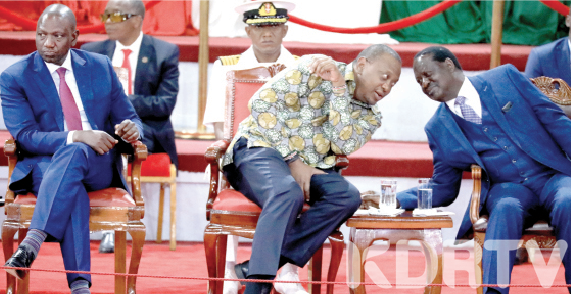 (KDRTV) – President Uhuru Kenyatta will only get his way in the County Revenue Allocation saga if he seeks help from his Deputy William Ruto, a man he has worked so hard to destroy in recent times.

The President has been working with ODM leader Raila Odinga to cut Ruto to size. He started by stripping Ruto allies of all leadership positions in both the Senate and the National Assembly. In a moment of madness, Uhuru replaced a politically hardened Kipchumba Murkomen as Senate Majority leader with Samuel Poghisio who is not only a Jubilee Member but a man who looks out of depth for the position. The soft-spoken Irungu Kang’ata is no match for former Senate Majority Whip Susan Kihika. Kang’ata thinks that being in Senate leadership is a privilege to bully others, for the Nakuru Senator leadership was a responsibility.

Murkomen and Kihika never lost a single government agenda on the floor of the house. Ironically, they were kicked out for allegedly defying the party leader. Today, the new leadership cannot whip Senators to toe the line of the government. Uhuru needed Raila to help get the votes to pass the new formula but the ODM leader cannot throw his supporters in marginalized counties under the bus. ODM also feels that it is being used by Jubilee.


Of course, Uhuru has a solution. He can reach out to Ruto for help. But will he do it? The new revenue allocation formula benefits both Rift Valley and Mt Kenya regions, so Senators allied to the DP have every reason to support it.

On Sunday, Senator Kihika asked her fans on Twitter on whether Tanga Tanga should help Uhuru, watch the show unfold or give him the middle finger.

Some guy kicked out his wife & kids & moved in another woman & her kids. Now he needs the family’s support to accomplish a task. His ‘new family’ has refused to help. Should the old family
A. Hold their noses and help him
B. Watch the show unfold
C. Show him the middle finger🤷🏽‍♀️