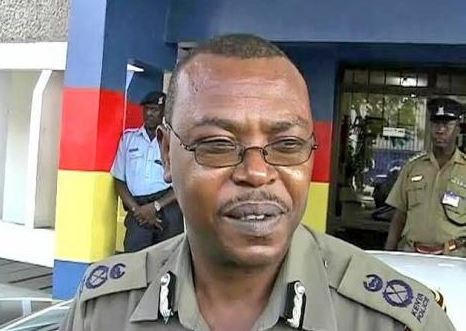 According to police report, three men walked into the house of the police boss, assaulted the house girl before tying her up, and walked away with valuable goods.

A resident, Samuel Kariithi, noticed the two men coming out of the house in Pembe Tatu Area in Nyeri county carrying the goods and suspected something might be wrong. He called the police who quickly responded and managed to chase the men who were using a motorbike.

Unfortunately, the duo managed to flee leaving behind the motorbike which had luggage and a search on where a robbery had taken place kicked off.

“It was established that the subject had taken place at a house belonging to Mr King’ori Mwangi. Officers entered the house and found one Jane Njoki a house help at the home, who had her legs tied with ropes, and mouth covered with a piece of cloth,” the report read in part.

The house help, Jane Njoki, said she left the gate open after receiving the dog’s food.  As she returned back to close the gate, three men forced their way in and threatened to stab and kill her if she dared to scream.

Njoki said the three men also broke a safe and made away with a pistol.

“They held her hostage as they ransacked the whole house and made away with electronic goods in an ordeal that lasted for about eight hours,” the report said.

“A tracking dog from K9 Unit has been employed to track the robbers and a team of officers dispatched for the task. The house help was escorted to the station in order to record a statement over the matter,” the report said.