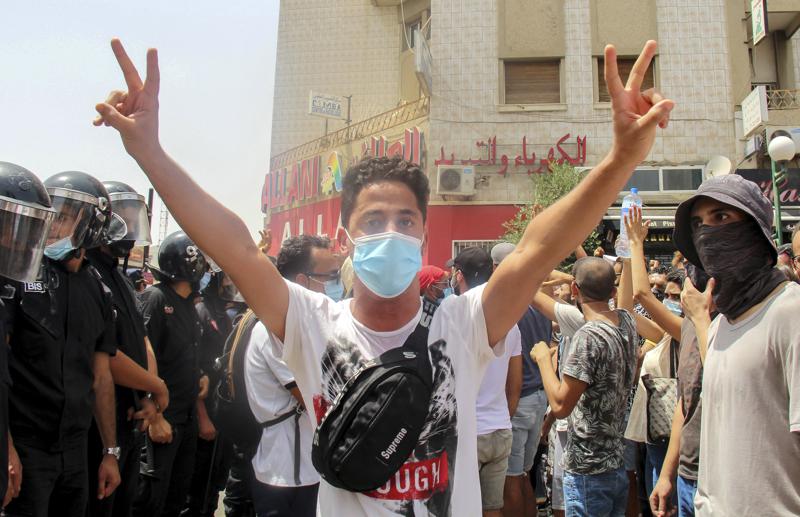 Thousands of protestors who were angry at how the government handled Covid-19 stormed the streets and, on various occasions, clashed with the police.

President Kais Saied declared that he would assume the country`s executive authority after firing the prime minister.

The president said after firing PM Hicham Mechichi that he will take over the executive power with the help of the new chief he would appoint.

The president went further and suspended the Tunisian parliament for 30 days and revoked all deputies’ immunity.

The president maintained that the constitution of the country permits his course of action under article 80.

“The constitution does not allow for the dissolution of parliament, but it does allow for its work to be suspended,” Saied said.

Many Tunisian took to the streets to congratulate the President for his announcement. Local media reports indicate that the military vehicles surrounded the parliament building as crowds cheered the Saied`s moves.

The protestors were demonstrating against the ruling party in Tunis and other cities. They called for the freezing of the parliament.

Reports indicate that the police officers fired tear gas at the demonstrators and seized several people, with clashes emerging in several towns.

The President warned to quell the violent protestors with military force.

“I warn any who think of resorting to weapons… and whoever shoots a bullet, the armed forces will respond with bullets,” he said.

However, the Tunisian Parliament Speaker Rached Ghannouchi blamed the president for pointing “a coup against the revolution and constitution.”

“We consider the institutions to be still standing and supporters of Ennahda and the Tunisian people will defend the revolution,” Mr Ghannouchi, Ennahda’s leader, told Reuters news agency.

Tunisia is currently facing a deep economic crisis and badly hit African countries by the pandemic.