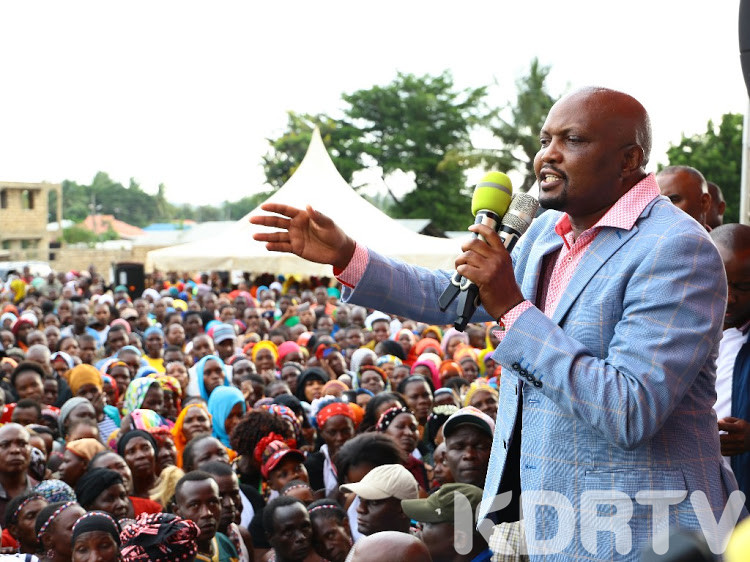 Gatundu South MP Moses Kuria is a man under siege following a demonstration held in Gatundu town on Wednesday to protest the MP’s alleged disrespect for President Uhuru Kenyatta. A handful of people turned out at the demos with placards written, respect the president.

Kuria, who is President Uhuru Kenyatta’s rural MP, has recently risen to be one of the president’s vocal critics. He has publicly asked Uhuru and ODM leader Raila Odinga to retire and go home in the 2022 elections. Kuria is opposed to the BBI report, which he believes cannot solve the problem of divisive elections.

Recently, the vocal MP has attacked several Mt Kenya leaders opposing Deputy President William Ruto’s 2022 presidential bid. One of the politicians who has been on the receiving end of Kuria’s wrath is Kirinyaga Governor Anne Waiguru, who the MP indirectly called a hoe who stole NYS money.

Kuria’s aggressive attacks on the president have raised eyebrows on what could be provoking him.

A local daily recently revealed that a former governor is working behind the scenes to ensure that Kuria loses his seat. According to the paper, Kuria needs to be taught a lesson.

It has since emerged that President Uhuru Kenyatta’s son Jomo Kenyatta. According to sources in Kiambu county, Jomo has been earmarked as the next Gatundu South MP and Kuria is not happy.

And the demonstrations were just part of a bigger plan to install Jomo as the next MP. It is believed this is one of the reasons Kuria is angry and has gone all-out attack on Uhuru. President Uhuru Kenyatta and his father Jomo Kenyatta have both been Gatundu South legislators. The seat belongs in the family just like the presidency and it is time another Kenyatta takes over.