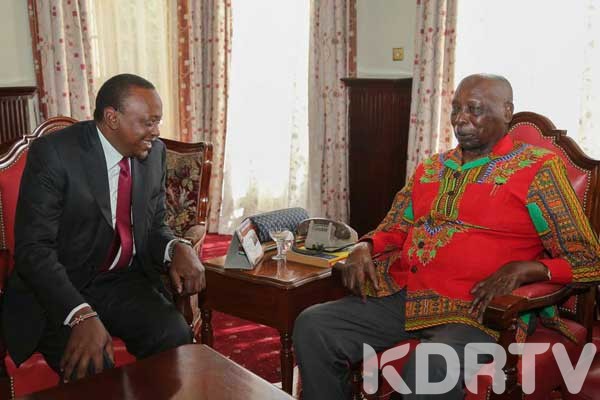 (KDRTV) – President Uhuru Kenyatta will lead the nation in viewing the body of former President Daniel Arap Moi on Saturday morning, the government has announced.

According to Joseph Kinyua, the head of civil service, Mzee Moi’s body will lie in state at Parliament from Saturday to Monday.

“President Uhuru Kenyatta will on Saturday 8th February 2020 lead the Nation in the viewing of the body of the former President, as well as the paying of last respects,” Kinyua said during a press briefing at Harambee Annex on Thursday.

President Uhuru, who is in the US for an official trip, is expected back in the country on Friday.

Joseph Kinyua, Head of Public Service: The body of Pres. Moi shall lie in Parliament Saturday to Monday. Public viewing at Parliament will be done on Saturday, Sunday & Monday between 8 AM – 5 PM. The casket will leave the funeral home at 8.05 AM pic.twitter.com/nYNffWofjK

Mzee Moi’s body will be moved from Lee Funeral Home to parliament on Saturday morning. His casket will be draped in the national flag.

On Tuesday, a state funeral will be held at the Nyayo stadium where the late President will be accorded the 19-gun military salute.

The government has declared Tuesday a national holiday to allow Kenyans to take part in the celebration of the former President’s life.

“To enable every Kenyan to participate in the celebration of the life of President Moi, the Cabinet Secretary for Interior, on the recommendation of this Steering Committee, has declared Tuesday the 11th Day of February 2020 a Public Holiday of general observance throughout the Republic of Kenya,” Kunyua announced.

The steering committee, in charge of the funeral preparations, also asked each Kenyan to plant a tree in honour of the former President.

“In addition to other ways of remembering and honouring the Late Mzee Moi, we encourage each and every Kenyan to plant a tree in his memory or undertake an act of benevolence for the most needy members of our society,”