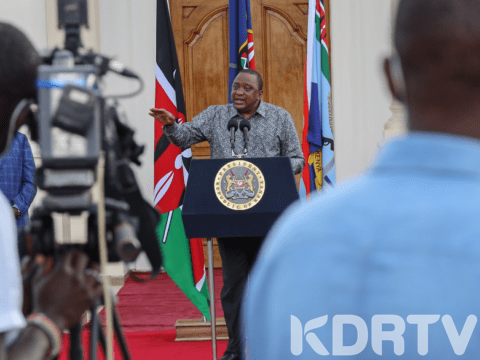 Uhuru Warns Ministers Over Initiating Projects Without his Express Authority

(KDRTV)-President Uhuru Kenya has issued a stern warning to ministers against starting projects without his ‘express authority.’

Uhuru warning surfaced during a high profile virtual meeting at the State House Nairobi, with Cabinet Secretaries, Chief Administrative Secretaries and Principal Secretaries where he pinpointed the government development priorities for 2020/2021 financial year

During the meeting, the first-in-command stated that during this financial year, his administration will focus on completing the ongoing projects

President Uhuru Kenyatta said that for the projects, set timelines and budgets further restating his previous command that no project shall be initiated without his authority.

Uhuru also said that the speed at which the project will be implemented will determine the accountability rate of all Cabinet Secretaries, Chief Administrative Secretaries and Principal Secretaries

To ensure quality delivery for the public, the president urged the high profile cabinet members to consider collective responsibilities and this should be displayed in the entire Ministerial Establishment