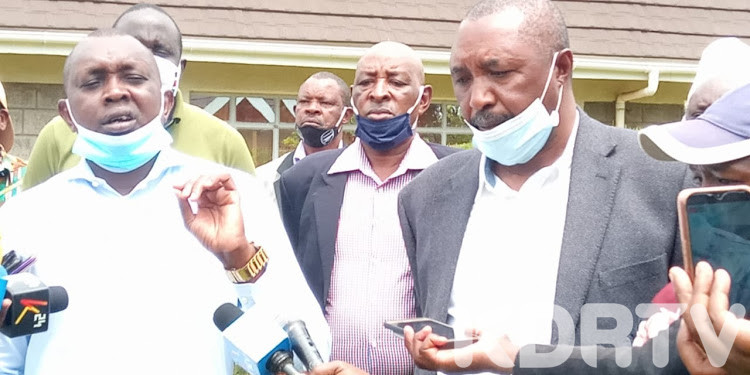 Msando, a man believed to have played a crucial role in the planning of the 201 elections was murdered on July 29,2017 less than 10 days to the elections.

His mutilated body was found in a thicket at Muguga forest in Kiambu. An autopsy revealed that he had been strangled.

Almost three years later and detectives have never made any arrests. However, it is widely believed that he was murdered over the role he would play in the elections which were won by Jubilee.

And now Oscar Sudi (Kapsaret) and Kimani Ngunjiri (Bahati) say they know his killers and many more secrets they are ready to reveal in the coming days.

“It’s not a joke and soon we will reveal everything including those who killed Msando and others,” Oscar Sudi said on Saturday.

Chris Msando was a father, brother, uncle and friend to many. Those claiming to know how killers shouldn’t be free.

I have known the wife and kids for long. They are suffering and nobody should be allowed to joke with his murder.

The two lawmakers called for a press conference on Saturday at Kapsaret to discuss the recent purge in Jubilee which has seen Deputy President William Ruto and his allies sidelined by the government they helped form.

On Monday this week, President Uhuru Kenyatta kicked out Senators; KIpchumba Murkomen and Susan Kihika from the Senate leadership.

Ya'll remember when Moses Kuria at one time promised to reveal Msando's murderers and then went quiet? Whatever Oscar Sudi and Ngunjiri are trying to do ain't new, their thirst for political mileage is just opening wounds of Msando's family that they've tried to nurse for long .

This has infuriated Tanga Tanga so much that they are ready to open a can of worms on the ills of the Jubilee regime.

On Monday, Moses Kuria claimed that Jubilee rigged both the 2013 and 2017 elections. He congratulated ODM leader Raila Odinga for the wins.

There is nothing new Oscar Sudi, Ngunjiri $ Kuria can tell us about the death of Msando. We know the team killed him to compromise IEBC. Both #PresidentUhuruKenyatta and Ruto are beneficiaries of the fraud. No difference with Felicien Kabuga. DCI, arrest them now! #CurfewKenya pic.twitter.com/B3gm6eDDJR

“I have always been in denial that we didn’t steal the 2013 and 2017 elections. Today its almost clear. Congratulations belatedly Baba,” Moses Kuria posted on Facebook.

Earlier this year in January, Kuria called for a press conference at Parliament buildings and said that he had nothing to do with Msando’s death.