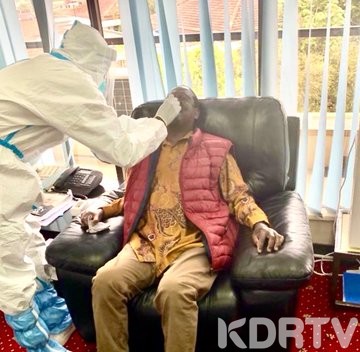 (KDRTV) – Kenyans were left with more questions than answers when ODM leader Raila Odinga publicly announced his COVID-19 test results on Monday last week. For no apparent reason, the former Prime Minister found it necessary to make it known that he had tested negative for the dreaded virus.

Raila also urged Kenyans to take the test because a ‘COVID-19 certificate is becoming an important document as we continue battling the pandemic.’

Just received my COVID-19 test results which came back negative. I commend @KEMRI_Kenya and Prof. Matilu Mwau of the Testing Centre, for the professionalism and efficiency displayed. Once again, I appeal to Kenyans to take tests, sanitize and observe social distancing. pic.twitter.com/bgXE8WzKz5

Tanga Tanga blogger Dennis Itumbi has now claimed that Raila made a lot of noise about the test because he needed to travel out of the country. Most countries have restricted international travel as one of the measures to curb the spread of COVID-19. Raila’s insistence on getting a certificate was the only way out of the country.

Read Also: Kikuyus Will Vote for Ruto because he is a thief, Just like them – Mutahi Ngunyi

Itumbi further claims that the former Prime Minister left the country over the weekend for Abu Dhabi on a chartered flight. He was accompanied by his daughter, a neurosurgeon, one of his aides and one bodyguard. The blogger claims to have seen the travel manifest which shows all the passengers had their COVID-19 certificates.

2. The flight took off from Wilson.

3. The Manifest, shows he was accompanied by the daughter, A renowned Neurosurgeon, a Personal Assistant and a bodyguard..

Until now, ODM and Capitol Hill have not issued any statements to dispute Itumbi’s claims. As a national leader, the public deserves to know Raila’s whereabouts.

On his Facebook account, Raila hinted that he was in Congo for a conference on the Grand Inga Dam? However, and as you can see from the video he shared, the conference was virtual. So was Baba addressing it from Abu Dhabi, Kenya or Congo?


The other most critical question is the rumours on his health. Is Raila Odinga sick? Could this be the reason he allegedly travelled with his doctor? What is his mission in Abu Dhabi?

There are a lot of questions in this story, but first, ODM should tell us where Raila Odinga is.