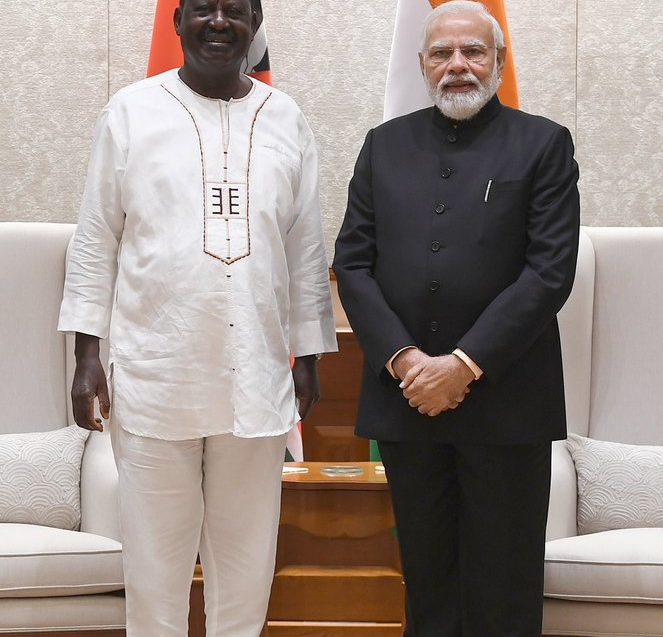 The Indian PM expressed his delight of being able to meet Raila Odinga after nearly three years.

‘’Delighted to receive my friend H.E. Raila Amolo Odinga, former Prime Minister of Kenya. I fondly recollect my past interactions with him in India and Kenya. India and Kenya enjoy strong bilateral relations and we welcome further strengthening of our ties.’’ Prime Minister Modi wrote on his Twitter account.

Raila Odinga on the other hand tweeted, ‘’Delighted to have had warm discussions with India’s Prime Minister @narendramodi.  Our nations share a fond bond as many Kenyans have for decades attended universities here. My hope is that we shall strengthen ties and learn more from each other in the years ahead.’’

The ODM leader has been in India since February 10 to check up on his daughter Rosemary who is undergoing treatment at Sreedhareeyam Ayurvedic Eye Hospital & Research Centre.

Rosemary lost her sight in 2017 due to a tumor, and her family sought for cure in a number of countries including South Africa, Germany, Israel and China.

They visited Sreedhareeyam for the first time in 2019 after learning about its ayurvedic eye care facilities. They began treatment with Narayanan Namboodiri, Chief Physician Sreedhareeyam, and his staff.

She restored her sight and returned to Kenya within four months. She returned to Koothattukulam with her family to express gratitude to Sreedhareeyam and to receive follow-up treatment.

Rosemary and her family flew back to Indian on February 7 and is set to remain under treatment till Feb 28.