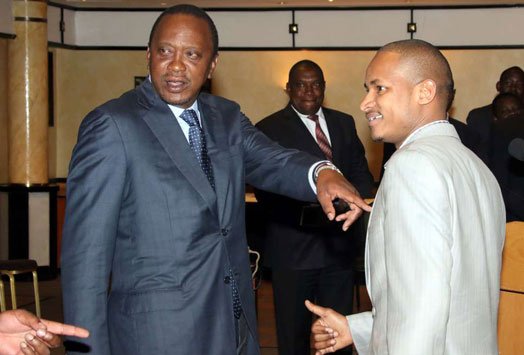 Embakasi East member of Parliament Babu Owino recently sensationally claimed President Uhuru Kenyatta whispered to him who the next President would be.

And your guess is as good as mine as the lawmaker claims Uhuru tipped Raila to be the next Head of State.

In a hilarious tweet sent on Wednesday, June 2, Babu Owino showered Uhuru with praised as he expressed gratitude to the President for his commitment to deliver promises to Kenyans.

Through the same tweet, the legislator also seemed to suggest Raila would be endorsed for presidency at the expense of fierce rival William Ruto.

“Thank you very much President Uhuru Kenyatta for overworking and delivering to Kenyans. Watch and listen as Uhuru whispers to me that Baba will be President in 2022,” tweeted Babu.

Thank you very much President Uhuru Kenyatta for overworking and delivering to https://t.co/OT59NecCkP and listen as Uhuru whispers to me that Baba will be President in 2022. pic.twitter.com/f4wcKEGECg

The lawmaker captioned a video of Raila and Uhuru addressing locals in Gem, Siaya county to further drive his point home.

There was some truth in Babu Owino’s sentiments as the President has indeed acknowledged Raila Odinga’s role in upholding peace in the country since the pair’s famous handshake back in 2018.

During the 58th Madaraka day celebrations, Uhuru revealed Raila did not demand anything from him when he first reached out for a truce three years ago.

With the election season drawing closer, Uhuru vowed to continue working with Raila closely in uniting the country and spreading the peace agenda.