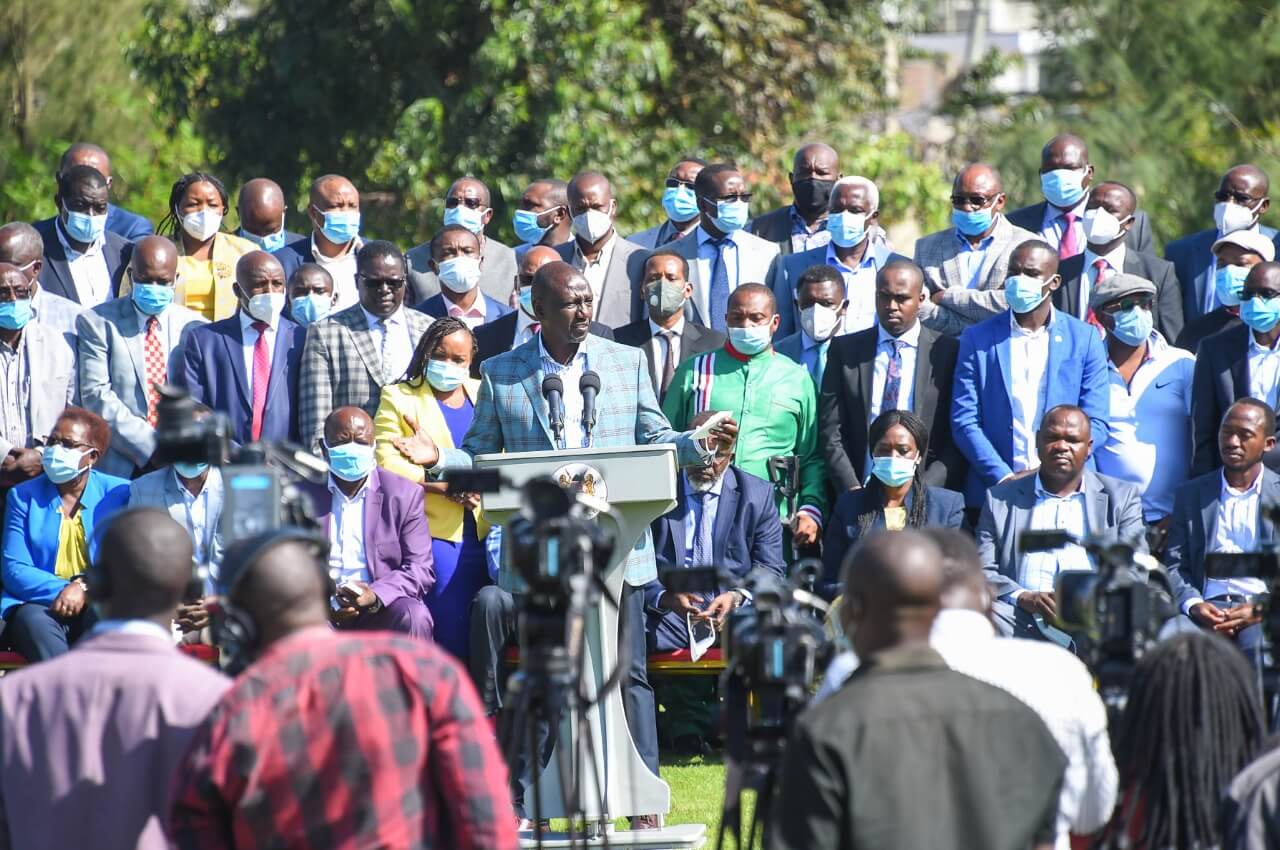 William Ruto addresses the media
(KDRTV) – I keenly followed as the Hustler Nation announced their deliberations on the BBI report at William Ruto’s Karen Residence on Wednesday evening.
I must agree that some of the proposals are really good and anyone interested in building a better Kenya should consider them. Particularly, the proposals to have a multiple-choice referendum caught my eyes. We can’t reduce all the more than 70 constitutional amendments to a single Yes/No question.
Kenyans should be allowed to choose whether they want the government to increase revenue allocation to counties but oppose the proposal to increase the number f MPs.
The proposal to have elected women both in the Senate and National Assembly should also be considered if it is the only solution to reducing the number of MPs. More importantly, it will help us get rid of the culture of nominating socialite bimbos.
However, I was surprised when the DP and his allies said the referendum should be held in 2022. This they said, will come at zero cost, and the Ksh 14B meant for the plebiscite.
Read Also: The Moment DP William Ruto Destroyed KTN Reporter Duncan Khaemba
The million-dollar question is how will some of the proposals fronted by the Hustler Movement be implemented without an amendment before the next general elections?
We need a referendum to get women senators, create the 70 new constituencies, and implement a raft of all the other proposals from the Hustler Nation.
So was Ruto joking when he told Kenyans they want a referendum in 2022 or just taking Kenyans for fools?
It has also not escaped our mind that the DP and his allies are silent about the proposal to increase the size of the executive by creating the positions of Prime Minister, two deputies, and Assistant Ministers.
In his own words, the DP said there is a better way of doing this. That way is to #RejectBBI in totality.
Read Also: You have no license to Insult Hustler – Ruto to Raila
Nobody asked for a Prime Minister and two deputies. Kenyans are already over-represented. We don’t need more political positions.
If we must have a plebiscite, it should be about abolishing some positions in the current constitution.
Do we need a Deputy President and Deputy Governors? We should seriously think about abolishing the Senate, Women Reps, and nominating socialites to parliament.
Now that we have a presidential term-limit, anyone who loses an election should be barred from contesting again. If you lose elections, get something better to do.
Politics is not a career.
Subscribe to watch latests videos
In this article:BBI Report, Headlines, William Ruto