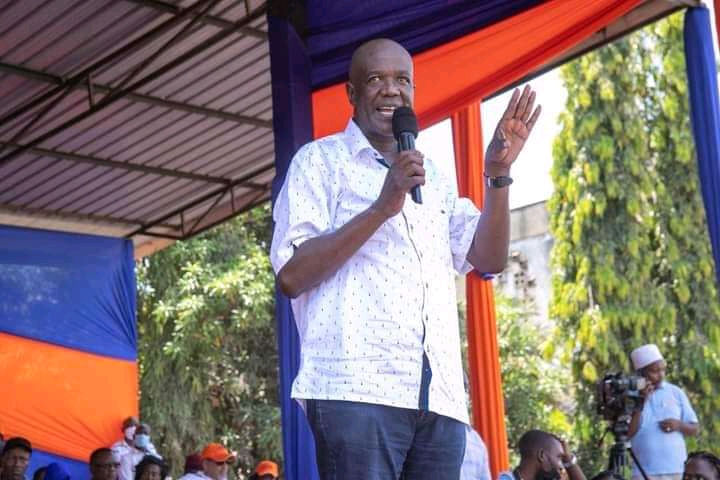 The second in command DP Ruto is now balancing his political network in coastal region on a falling line after the heavyweight stalwart and resourceful legislator has officially decamped from United Democratic Alliance (UDA) to Orange Democratic Movement (ODM) ahead of next year’s general election.

Raila’s three-days coastal tour is reaping fruitful kickbacks to ODM party and the entirety of his presidential bid. Having been solidified his roadside rallies and heavy campaigns in Kilifi county, the hustler nation allied lawmaker CAS Gideon Mung’aro has finally announced his departure from Tangatanga faction to ODM party in the ongoing pre-election arrangements for 2022 election.

Speaking during a stopover at Pwani University, Hon Mung’aro affirmed to dribble forward Raila’s presidency and sell Azimio la Umoja’s manifestos to all walks in Kilifi county. Mung’aro has been a key player in marketing DP Ruto’s Bottom-up theme to the ground people and his exit might ruthlessly haunt DP Ruto’s presidency.

Mung’aro is eyeing for Kilifi gubernatorial seat in 2022. He is set to join the battlefield and dust UDA dependable confidant Hon Aisha Jumwa among other candidates to clinch to the county’s top seat.

On the same campaign gear, DP Ruto is currently traversing Imenti South Constituency while drumming support for his presidential bid. Ruto has pledged to resuscitate Meru county economy by bridging the gap between the less privileged Kenya and the rich people through the bottom up economic model.

He reiterated that hustler nation government will take cover of all micro and small scale business enterprises by injecting financial aid to their various business to eradicate the intensity of the increased taxes.

On the other hand, One Kenya Alliance (OKA) chief partners (Mudavadi, Kalonzo, Wetangula, Gideon Moi and Cyrus Jirongo) are on the rest mode and set to kick off their countrywide campaigns next week. They are also expected to declare their candidate early next year.