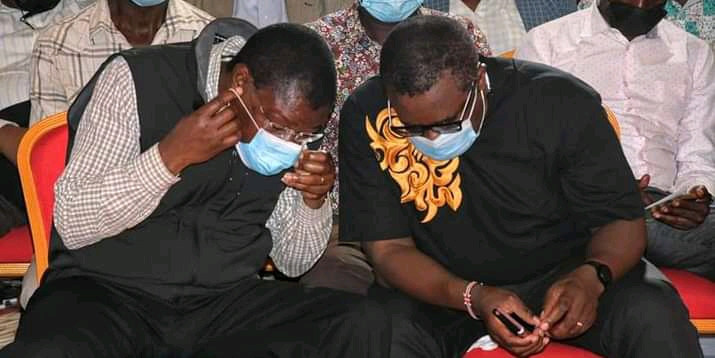 A bruise political tackles between Bungoma Governor Wickliffe Wangamati and speaker of the Senate Kenneth Lusaka has escalated and taken a different discourse after Wangamati came out gun gazing as he vowed to take Lusaka and Wetangula head-on ahead of 2022 general election.

Wangamati has officially welcomed a full blown war and declared that he will no longer entertain special treatment and decency handle to the latter citing that he (Lusaka) has taken his silence to climb the ladder of undermining and defaming him in public rallies. The governor who parted ways with Bungoma senator Moses Wetangula noted that it is time to face his opponents (indirectly referring to Lusaka) with zeal and vigour ahead of 2022 general election.

“From now henceforth, I will be addressing you as my competitor, there will be no respect anymore” Wangamati confronted Lusaka while addressing mourners in Kanduyi.

This frosty ugly war between Lusaka and Wangamati emerged after Ford Kenya party leader Moses Wetangula excommunicated Governor Wangamati from the party alleging that he (Wangamati) was secretly behind the aborted coup which had aimed at dethroning him (Wetangula) from Simba party leadership.

Wetangula has held the record of sourcing Wangamati into active politics in 2017 where he bundled out Senator Lusaka from the governor’s position in Bungoma county.

Wangamati and Wetangula fell out after the aborted coup that was headed by Kanduyi MP Hon Wafula Wamunyinyi and his counterpart Tongaren MP Eseli Simiyu who implicated themselves as Ford Kenya party leader and Secretary General respectively.

Having been sharpened and trimmed his deputy, Wangamati has also declared to front his junior Hon Charles Ngome to battle out Wetangula for senatorial post on Deputy President William Ruto’s United Democratic Alliance (UDA) ticket.