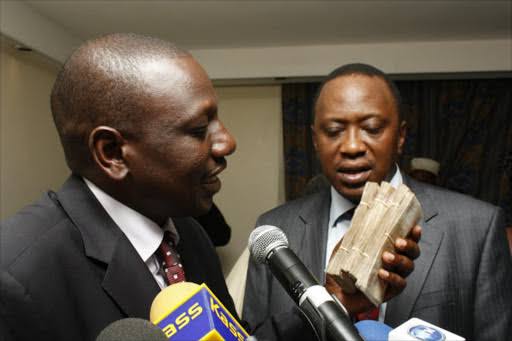 PHOTO 2022 01 07 14 48 06
KDRTV NEWS NAIROBI-Deputy President William Ruto has been accused of lying to donate Ksh 2 million to a section of the Githurai business community.
According to the group who addressed journalists on Friday, January 7, they were mobilized to attend Ruto’s meeting whereby the second in command sold his hustler agenda before promising them which could be given to their leaders before distributing to the members.
They were then advised to wait a week and the money would be placed into their accounts.
According to the deal signed by DP Ruto, the Githurai transport sector was to receive Ksh1 million while the market sector would receive Ksh1 million.
The leaders stated that Nominated Senator Isaac Mwaura had mobilized them and taken them to the DP’s official residence in Karen.
READ ALSO: Why Ruto & Raila Are Not In Hurry To Name Running-Mates
“We want everyone from Githurai Business Community to understand what has happened. Nominated Senator Mwaura was the one in charge of the delegation. He came picked people here and took them to Karen. The DP promised Ksh2 million to the business community.
“I tried to contact him because it’s been difficult for us leaders down here on the ground since everyone continues saying we were given the money and shared it amongst ourselves.” Others accuse us of obtaining and selling wheelbarrows,” one of the leaders said.
In the past few months, cash handouts by DP Ruto have not only sparked enthusiasm among audiences attending his rallies but have also led to conflicts and allegations among business organizations and their local leaders.
Subscribe to watch latests videos
In this article:Deputy President William Ruto