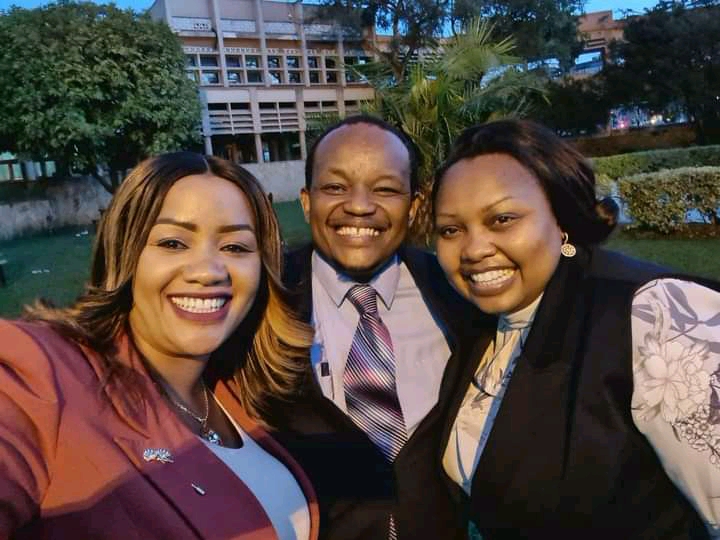 President Uhuru Kenyatta’s dependable defender has drawn a score of his unpredictable political future in Jubilee after engaging in a corridor negotiations with Deputy President William Ruto’s allies (Nominated senator Millicent Omanga and Laikipia Women Representative Hon Cate Waruguru) in what was interpreted as charting the political discourse that might influence his shift from Uhuru’s Jubilee to DP Ruto’s United Democratic Alliance ahead of 2022 general election.

This comes after the controversial Laikipia Women Representative Hon Cate Waruguru decamped from Jubilee party to open her new political life in hustler nation citing popularity of bottom-up economic impact to the electorates. Waruguru revealed that her supporters pushed her to the wall to join UDA so that she secures the seat.

Earlier, Kirinyaga county governor Hon Anne Waruguru had decamped to UDA after extensive consultation with various stakeholders and Kirinyaga voters. Waiguru pointed that going by the rate at which the ground had shifted to embrace hustler nation movement, it was quite predictable that she might lose her seat to Kirinyaga Women Representative Hon Wangui Ngirici who gained connected unwavering support in the region.

However, Jubilee Party National Delegates Conference (NDC) which is slated on 30th November at Moi International Sports Centre, Kasarani is believed to be warming up to excommunicate DP Ruto and his allied Tangatanga MPs from the party for allegedly betraying president Uhuru Kenyatta by forming a parallel party (UDA) that has specialized in criticizing Uhuru’s government.