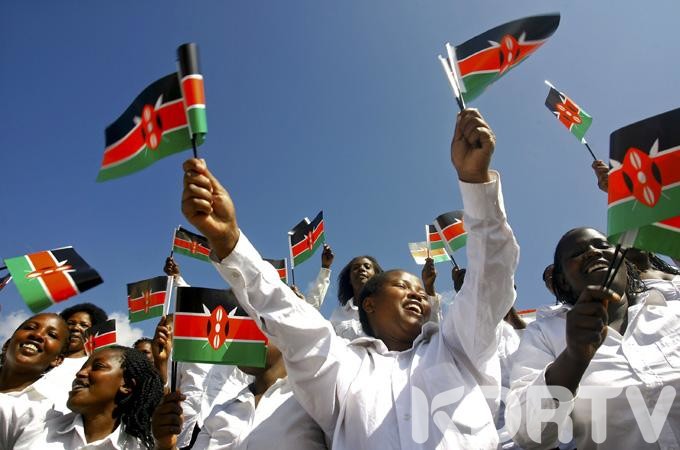 The other six presidential candidates got a combined percentage vote of 0.97 percent. Uhuru got over 25 percent of votes in 35 counties while Raila got 25 percent in 29 counties.

Chebukati Sends A Strong Warning to ODM Ahead of Kibra Poll

IEBC Chairman Wafula Chebukati said despite the few challenges the election process was generally successful. He also thanked the international observers who also confirmed the credibility of the election.

“Having fulfilled the requirements of the law, I wish to declare Hon. Uhuru Kenyatta as president-elect and Hon. William Ruto as the deputy president elect of Kenya,” Chebukati announced at 10 pm.

Uhuru, 55, starts his second term as the fourth President of Kenya after a neck and neck race with NASA’s presidential candidate, 72-year-old Raila Odinga.

Kenyans went to the polls on August 8 in a peaceful election that had eight presidential candidates. The two front runners were Uhuru and Raila.

Hours after voting ended, Raila called a press conference saying that the IEBC system had been hacked and Presidential results compromised. He urged Kenyans to reject the results.

IEBC responded by stating that the results on their portal were provisional and the final tally would be released after validating forms 34A and 34B. IEBC chair Chebukati said he was not sure whether the server had been breached or not. Later, IEBC CEO Ezra Chiloba was categorical that there was no attempt to hack the system.

Raila’s fourth try at the presidency

This is Raila’s fourth attempt at the presidency. In 2007, he lost to Mwai Kibaki in a highly disputed election that resulted in violence. The post election violence left over 1,000 people dead and thousands displaced. The crisis was solved after Kibaki and Raila agreed to form a coalition government. Raila became the Prime Minister.

Then, Uhuru was supporting Kibaki, and William Ruto, Raila. The violence led to charges of crimes against humanity being preferred against the two at the International Criminal Court (ICC) the charges were later dropped for lack of evidence.

NASA appointed Raila as the flag bearer in April 2017 and also named Kalonzo Musyoka as his running mate and prospective Deputy President – another repeat of the 2013 scenario – when they ran against Kenyatta and Ruto.

The NASA coalition was made of Musalia Mudavadi, Moses Wetangula and Issac Ruto.

As soon at Chebukati announced the results, Uhuru addressed the country in a 10 minutes acceptance speech. “God is good?” Started Uhuru. “All the time!” responded the enthusiastic crowd at Bomas.

Uhuru started by thanking God, Kenyans, all the supporters of Jubilee, IEBC and international observers. “On behalf of my family and the family of my deputy President William Ruto, I am thankful for the confidence you have shown to me and my administration,” he said.