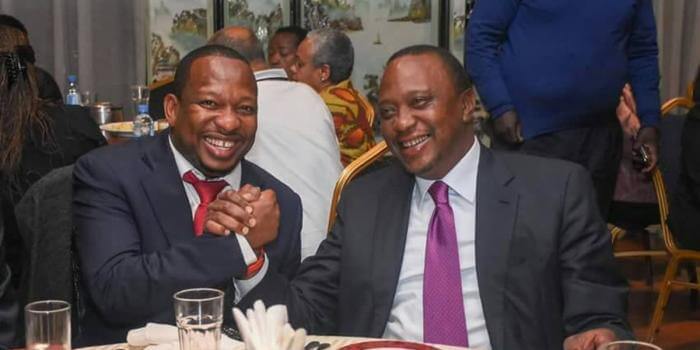 (KDRTV) – President Uhuru Kenyatta has admitted that he helped ex-Nairobi Governor Mike Sonko get to City Hall but instead of working, the controversial politician was up and around doing nothing.

In an interview with a local vernacular station, Uhuru praised the Nairobi Metropolitan Services (NMS) led by Major General Abdalla Badi. He said NMS has built hospitals and opened up roads in informal settlements.

Read Also: Ruto to Team up with Sonko?

“I helped Mike Sonko get that seat. Instead of working, he was up and about doing nothing. Just look at his replacement; he has opened roads in Industrial Area among other projects,” the President said.

Uhuru praises NMS saying he will be opening 7 hospitals in Nairobi in the coming weeks; add that's he helped Sonko get the Nairobi Governor seat but instead of working, he was up and about doing nothing.

Uhuru said Nairobi is an example of how the country can be under good leadership. He said NMS is transforming the face of the city.

Sonko was controversially impeached by the Nairobi County Assembly last month. His impeachment was affirmed by the Senate. The former Nairobi Senator has accused the President of plotting the impeachment.

A bitter Sonko has turned to social media to criticize the President, calling him a dictator and other unprintable words.

The Independent Electoral and Boundaries Commission (IEBC) had set February 18, as the date for the Nairobi Gubernatorial by-election. However, this was suspended by a Nairobi court following an application by Sonko.

The by-election is further in limbo after the County Assembly cleared Ann Mwenda Kananu who had been nominated as Deputy Governor by Sonko. Kananu took oath on Friday and is expected to be formally sworn in as Nairobi Governor this week.