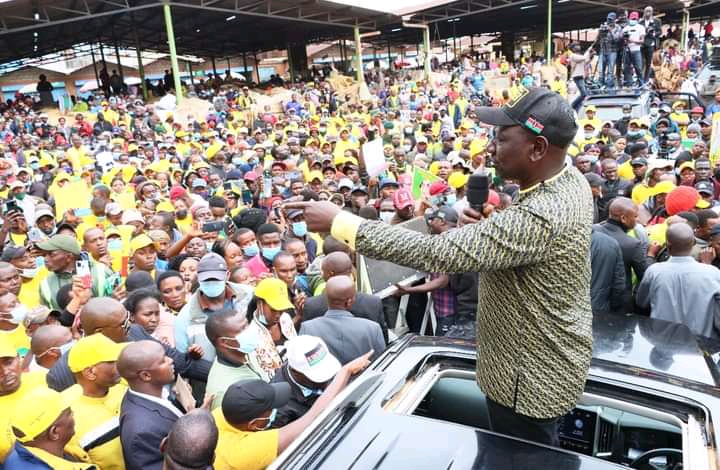 Deputy President William Ruto’s Tangatanga faction has gone wild after a battery of Gusii region legislators allied to hustler nation axis have protested exuding that the second in command DP Ruto cornered them as he snubbed the slated yesterday, Sunday, 5th, fundraising drive in West Mugirango.

Ruto had been scheduled to preside over the fundraising event in Bobembe which had tapped more than 30 Churches from different denominations. According to Mugirango West MP Vincent Kemosi, congregants in the 35 churches who were eagerly waiting for DP Ruto expressed discomfort with hustler nation chief who instead pitched tents in President Uhuru Kenyatta’s backyard, Nyeri county.

Borabu MP Ben Momanyi who is Deputy President William Ruto’s Key pointman in Gusii land noted that although the hustler nation supporters were treated with a crude shock following the inconveniences created by DP Ruto, but he re-affirmed that the hustler nation president will make his way to Kisii county in the course of this week.

“We understand that many Hustler Nation supporters were waiting for Deputy President William Ruto and he failed to come because of his tight schedule and busy events in Mt Kenya. But I want to assure you that he will come in the course of this week” MP Ben Momanyi said.

Mugirango West MP Vincent Kemosi, on the other hand, moved in swiftly to drum support for DP Ruto’s presidential bid revealing that the arrangements of Tangatanga brigade making inroads in Kisii county are ongoing to plaster Ruto’s bid ahead of 2022 election.

“You can bear witness how busy the Deputy President William Ruto is. All along, he has been promising he would be here, but as it turned out, he couldn’t make it” MP Kemosi said.

He insisted that DP Ruto is the only sure bet for the Gusii community owing to his mouthwatering development track record.