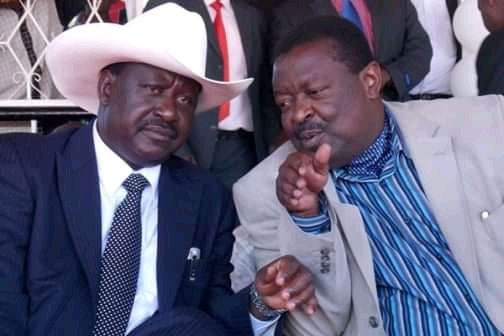 Despite the ongoing bruise political jostling between Mudavadi’s allies with ODM confidants, it has been exuded that the former premier Raila Odinga is secretly extending the negotiation platform with One Kenya Alliance partners in the attempt of striking a deal that will struck off hustler nation’s popularity on the ground.

According to Daily Nation, Raila, Kalonzo and Gideon Moi are optically wooing the adamant and untwisted ANC party leader Musalia Mudavadi to soften his political hard cover and join ODM for pre-election arrangements that will sweep away DP Ruto’s hustler nation narrative.

If the Raila’s tireless efforts of pursuing Mudavadi’s support will reap fruits, then it should be noted that one of the OKA partner with solicited base support and influence across the country will deputize Raila in next year’s presidential race.

Deputy President William Ruto, on the other hand, is also sandwiched between the puzzle of seeking his deputy in 2022 race. Lately, Mathira MP Hon Rigathi Gachagua who was among the inventors of hustler nation camp has been beaming up as the possible choice for DP Ruto’s running mate.

However, Kiharu MP Ndindi Nyoro who is believed to be DP Ruto’s mouthpiece has also consolidated various political pundits to bet on him as the DP Ruto’s running mate.

Mt Kenya being the rich-vote region that in most cases is believed to largely influence the victory of a presidential candidate, might force DP Ruto to snub other regions for a running mate and fetch from Uhuru’s backyard.