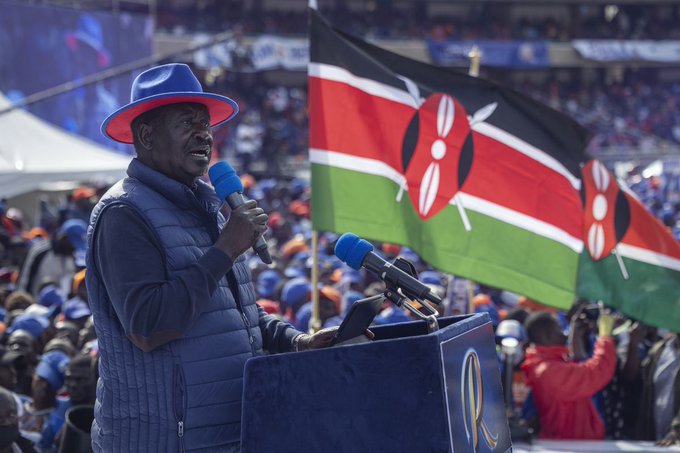 Speaking on Tuesday August 16 at KICC, Raila stated that the results announced by the Independent Electoral and Boundaries Commission (IEBC) should be nullified.

Raila remarked that Azimio will examine all available legal alternatives to seek the annulment of Deputy President William Ruto’s election.

He accused Chebukati of intentionally attempting to subvert the August 9 poll results.

Notably, he noted that their decision to reject the results was supported by the four commissioners led by Juliana Cherera, who distanced themselves from the results announced by Chebukati.

“Our view in Azimio is clear, the figures by Wafula Chebukati are null and void and must be quashed by a court of law. In our view, there is neither a legally and validly declared winner nor a president-elect.

“The law does not vest in the chairperson, the powers of a dictator to rule IEBC unilaterally. Decisions must be taken by consensus or by a vote of the majority,” Raila stated.

The Former premier also asked his supporters to remain calm as the Azimio’s legal team looks for alternatives.

“We will be pursuing all constitutional and legal options available to us. We will do so because we regard the many flaws in the election and the wrongs committed by IEBC as fatal to the process and outcome announced by Mr Chebukati.”

“I want to commend our supporters for keeping calm and keeping peace and urge them to continue doing so. Let no one take the law into their own hands. Justice will prevail,” Raila stated.

This is the fourth time Raila is disputing results. In 2017 he petitioned the IEBC after it announced Uhuru Kenyatta and William Ruto as the winners.

The Supreme court nullified the elections and ordered a repeat to be done but Raila did not participate.

Also Read: Ruto Reveals Details of His Phonecall Conversation With Raila Before Being Announced as President Elect