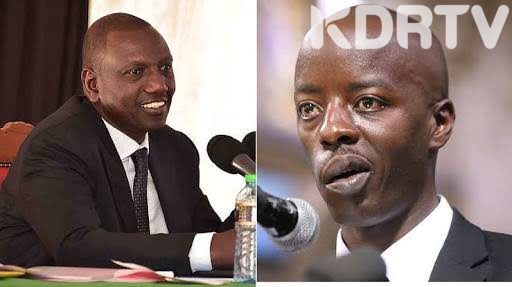 This is after the second in command was not given permission to speak during the 59 Madaraka celebration held at the Uhuru Gardens Monument and museum.

The move has elicited various emotions across the political spectrum, with the scion of ODM leader Raila Odinga among those pleased by the DP’s silence.

Without mentioning his name, Raila Junior implied that the DP had initially seized a portion of the Uhuru Gardens before the government reclaimed it.

In light of this, he stated that Uhuru was wise to refuse him the opportunity to speak at a place he claimed to have “grabbed.”

In his speech, the President stated that the Uhuru Gardens were unjustly seized by unscrupulous individuals. He did not reveal any names or even suggest that his deputy was involved.

“In fact, part of the Wilson Airport runway, to my left, had a Title Deed registered in the name of a private entity,” Uhuru said,

“It is on record that the 68 acres on which these sacred grounds sit had fallen into the hands of some unscrupulous individuals. My Administration had to reclaim the ‘grabbed’ site in 2019 and restore its dignity and purity.” Uhuru said.

Today’s Madaraka day was unusual from previous national holidays where DP Ruto introduced the President to make his speech.

President Kenyatta and DP Ruto have been reading from different scripts after falling out after the 2018 famous handshake.

Uhuru and his men are rallying behind Azimio la Umoja flag bearer Raila Odinga to succeed him.