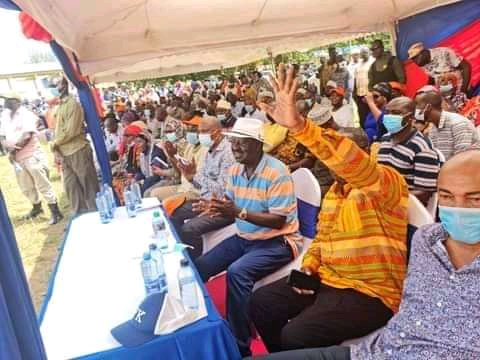 Raila was flanked with the handshake allied hardliners including the former Gatanga MP Peter Kenneth, MP Farah Maalim among a score of ODM confidants from the region.

He is also expected to rally Kwale residents to endorse the Azimio la Umoja agenda in the bid of uniting Kenyans under the basket of unity.

The two perceived Luhya Kingpins (Musalia Mudavadi and Moses Wetangula) have vowed to boycott the rally citing that Atwoli is incapacitated to convene such a mega rally on behalf of the Mulembe nation.

Mudavadi quoted that Atwoli (Not eyeing for any political seat) should desist from influencing and pushing some lots in Luhya nation to back Raila’s presidential bid.

“As a nation, we must observe democracy. We don’t want to hear that there is a meeting where someone who is not seeking any political office comes up and says now, I want to determine who shall be your leader” Mudavadi lamented.