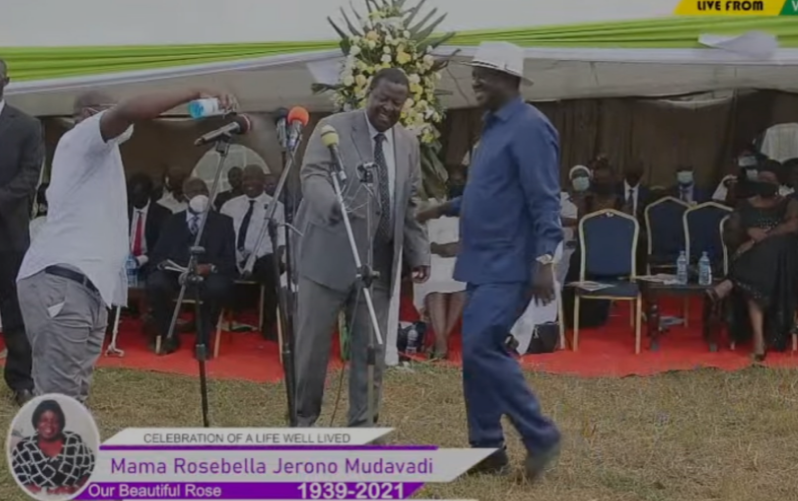 Raila, who was last at Mululu on January 9, arrived at the time when lots of people were probably in doubt that he would show up, momentarily bringing everything to a standstill.

Vihiga Woman Representative Hon. Beatrice Adagala was delivering her speech after the likes of Lugari MP Ayub Savula and Senator Cleophas Malala of Kakamega when Raila made his way.

In the spirit of Ubuntu about togetherness, and how all of our actions have an impact on others and on society.

The entrance came just minutes after several politicians such as Malala who had spoken, said bad things about Raila.

Raila’s impromptu visit comes after his three-day rest in the coastal region.

According to Raila, the health experts wooed him to take a one-week leave to regain the energy after engaging in active politics unstoppably for three consecutive days.

READ ALSO: Mpango Wa Kando? Kenyans On Each Other’s Necks As They Analyze Whether Baba And Atwoli Were With Their Side Chicks Recently

Speaking to the local publication in Mombasa where he has taken a three-day vacation, the ODM party leader Raila Odinga put the records straight that he Coastal three-day tour was not associated with any political engagement.

“I’m in Mombasa to rest for three days. I’ve not held any meetings today. I was advised to rest after Kasarani. After the three days, I will talk to different people and groups” he said

He is expected to tour Hamisi Constituency, Vihiga County, on Sunday, 19th December to break the ground and install the Azimio la Umoja roots in Mudavadi’s backyard.