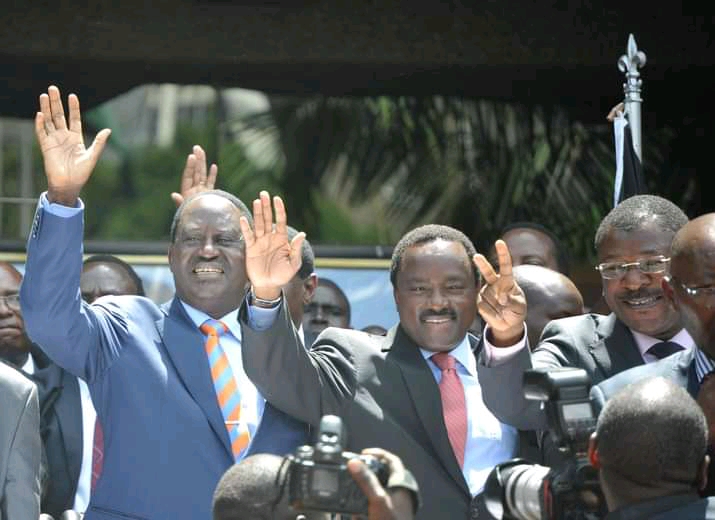 With less than 8 months remaining to next year’s general election, the showdown of political betrayals, party coalitions and re-alignments have taken the center stage of Kenyan politics.

Although OKA partners have insisted to pitch their State House path up-to the ballots, but their chances of securing the seat from president Uhuru Kenyatta have been tiny owing to the ongoing political developments ahead of 2022 general election.

Orange Democratic Movement (ODM) party leader Raila Odinga has shortened the journey of ascending to power immediately after declaring his interest in becoming president Uhuru Kenyatta’s successor in 2022. Azimio la Umoja faction has received a battery of legislators from the hustler nation camp and One Kenya Alliance outfit citing confidence in Raila’s bid.

According to ODM key hardliner Hon Kaluma, the former prime minister Raila Odinga might be warming up to receive a huge gift of endorsement from Kalonzo, Mudavadi Wetangula and Gideon Moi ahead of 2022 general election.

“The Best gift Kenyans want from Baba Raila Odinga, Kalonzo musyoka, Musalia Mudavadi, Moi Gideon and Wetangula Moses is that they have agreed to unite to save Kenya from @UDAPartyKe crooks. Add to this unity the support of President Kenyatta and Kenya will have a certain bright future” he said.

This emerges after Raila had hinted about working with Amani National Congress (ANC) party leader Musalia Mudavadi ahead of next year’s race.