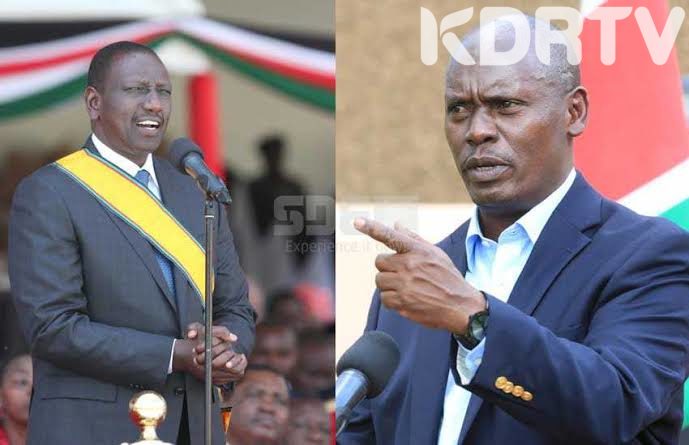 Ruto ally and Tujibebe Wakenya party leader William Kabogo has indicated that he is on his way out of Kenya Kwanza Alliance after he asked Azimio la Umoja for support in Kiambu county to vote for him in the August 9 general elections.

In a video that has gone viral on social media, the former Kiambu Governor hinted that he will drum up support for the former Prime Minister’s presidential bid.

“I am calling on Raila Odinga supporters, when voting for Raila Odinga as President, also vote for William Kabogo as Governor,” he said.

The video by Kabogo has elicited mixed reactions online with netizens speculating a fallout in the Ruto camp.

The video comes barely a week after Kabogo who is seeking to be Kiambu Governor on Tujibebe Party ticket clashed with UDA’s Kimani Wamatangi at a campaign rally.

The rally, which was led by Kenya Kwanza’s running mate Rigathi Gachagua, was marred by an exchange of words between the two leaders, with each trying to prove to be superior.

“I will no longer buy fear from you Kabogo, you spoke here and I did not interrupt you, my focus is on developing Kiambu, and do not dare me. Look elsewhere if you want to sell fear – who told you this county belongs to you? Shut up and get out of here!” Wamatangi lamented.

In an interview with NTV on Wednesday, Kabogo lamented that small parties within Kenya Kwanza were being sidelined during rallies.

“We have stated that we want the coalition principals to sit down and have discussions on what is happening to us because it seems that the plan of Gachagua is to popularise only UDA yet we are in a coalition.

“If they do not respond then we will take it that they agree with us. We shall continue as a party because we did not fold up.  I have not personally thought of joining Azimio. I am not a leader that changes the stand easily,” he stated.