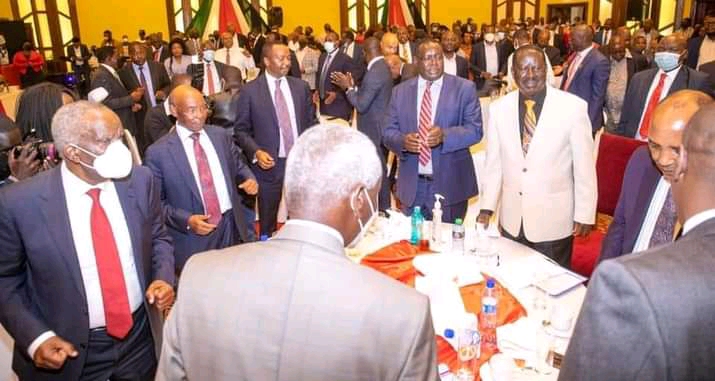 “You must be wondering what will happen after this. We will interrogate on who is best suited to protect the interests of Mt Kenya and a decision will be made” Equity Bank Founder Peter Munga stated.

According to the National Assembly Deputy Majority Chief Whip Maoka Maore, who plays an inner role in the billionaires outfit, revealed that the declaration to front Raila’s presidency will be made today and gear up political stage that will hopefully topple DP Ruto’s hustler nation narrative of bottom-up.

“After our assessment of the candidates, we settled on Raila as the most suitable to succeed President Uhuru Kenyatta. We will be making an announcement today as we discuss other pertinent issues touching on the future of mt Kenya” Maoka Maore quoted anonymous source.

This comes a time when the former premier Raila Odinga is set to verdict on his interest succeed Uhuru in 2022. Raila will make a landmark declaration on Friday, 10th where ODM delegates drawn across the country are expected to attend.

Prof Kisiangani Warns Raila From Believing He Conquered Mt Kenya: Those Billionaires Can’t even Convince their WorkForce To Vote For You