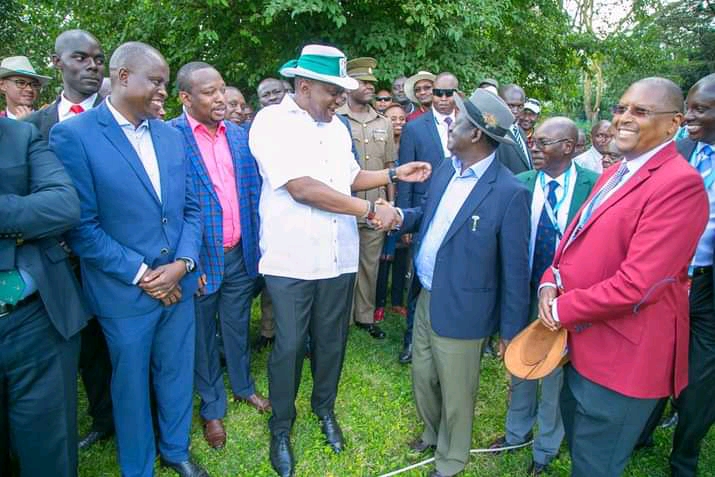 The head of state president Uhuru Kenyatta has for umptheenth times been accused by the Deputy President William Ruto’s hustler nation allied legislators for allegedly cornering Raila Odinga’s presidential bid owing to the fact that he (Uhuru) fears to introduce Orange Democratic Movement (ODM) party leader Raila Odinga to the people of the mountain.

It has been established that the former prime minister Raila Odinga has severally taken Jubilee party leader Uhuru Kenyatta to the lake region and even conjointly commissioned various development projects in the region while Uhuru has been remained hesitant in accompanying ODM chief to central region.

Although Uhuru is yet to declare publicly on the candidate he will endorse in next year’s presidential race, but internal murmurs and disquiet have alleged that there are possibilities President Uhuru Kenyatta might settle on Orange Democratic Movement (ODM) party leader going by the recent political developments between ODM and Jubilee.

However, the dilemma surrounding Uhuru’s hesitance in taking the former premier to the great people of the mountain might be solved today as the two BBI chief principals are set to officiate Nakuru County in becoming a city today.

This will be the first time Raila and Uhuru are touring Mt Kenya region together. Uhuru has been so keen in playing his political cards behind the scene as a tactical step of debunking the famous notion of Uhuruto’s “Ya Uhuru Kumi na ya Ruto kumi”.

Deputy President William Ruto on the hand is expected to extend the bottom-up campaign rallies in Mwala Constituency, Machakos county where he is set to drive the agenda of empowerment programmes to hundreds of women groups, Bodaboda saccos and donation of simple tools and machines to jobless youths in the region.