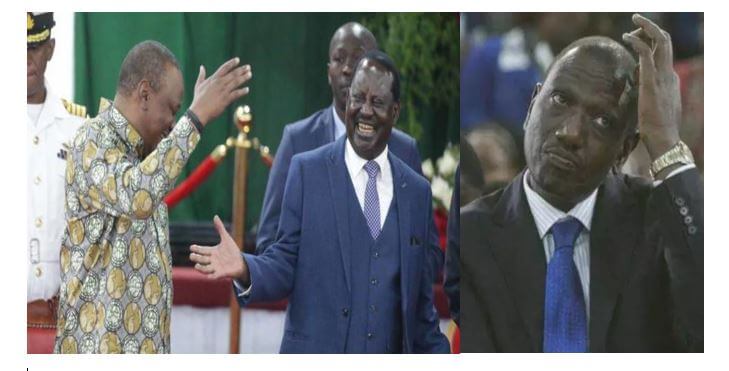 The Hustler Narrative in Trouble

(KDRTV) – It all started at a burial in Vihiga when President Uhuru Kenyatta controversially stated that it could be time to have a President outside the Kikuyu and Kalenjin communities which have been in power since independence. Uhuru was reacting to his Deputy William Ruto’s hustler vs dynasties politics.

According to Ruto, it is time for other Kenyans to take over the leadership of the country from families of privileged individuals. Ruto is leading an assault against the Kenyattas, the Mois and the Odingas of this country.

Read Also: All Eyes on Kisumu as the Hustler Ruto Makes Maiden Tour

It seems the Hustler Narrative is gathering pace, getting President Uhuru Kenyatta and his handshake partner Raila Odinga by surprise. The President was especially caught off guard over claims that his Mt Kenya backyard may not support the BBI report. Mt Kenya has the biggest number of Hustlers or in other words William Ruto’s supporters.

Reports have now emerged that Uhuru has now launched an assault on Ruto’s hustler narrative. On Monday, the President opted to reach out to his Mt Kenya backyard through his native Kikuyu language. The interview was broadcast on all leading Kikuyu radio stations.

Specifically, Uhuru warned Mt Kenya about Hustler Nation, at one time saying that disqualifying someone from being President because their father was President would also mean stopping one from being a doctor if their parents were doctors.

President Uhuru Kenyatta: If someone wants to use the logic that because my father was President, & now I am president, our Family is a dynasty. Does that mean if your father was a doctor that you should not be one? pic.twitter.com/zAM9VeJ0EC

But it is not only Uhuru who is countering the Hustler Narrative.

Immediately after the funeral in Vihiga, Musalia Mudavadi’s ANC Party called for a press conference in Nairobi where urged William Ruto to resign or be impeached.

They accused the DP of undermining his boss and the government he is serving, a phrase we have heard severally in recent times.

A few days after the press conference, Wiper Leader Kalonzo Musyoka added wood to the fire by claiming that Ruto had given his share of cabinet slots to people from his Kalenjin community. Not known for confrontations, this was a different Kalonzo.

Read Also: You have no license to insult Hustlers – Ruto to Raila

ODM leader Raila Odinga has not been left behind as he has recently been leading the full-fledged war against the Deputy President. Last week, Raila accused Ruto of undermining Uhuru and running an opposition wing within Jubilee.

The former Prime Minister further revisited some of the promises that Jubilee made prior to the 2013 elections. Known for his political rhetorics, Raila branded Ruto Mr. six months.

KDRTV has credible information that Uhuru, Raila, Mudavadi, and Kalonzo have opted to lead a coordinated attack to counter the Deputy President.

This strategy was arrived at after a meeting on the eve of the funeral in Vihiga. The meeting was held in Kisumu.