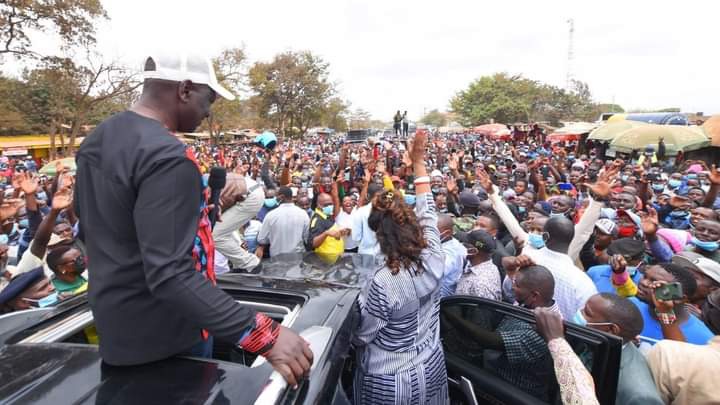 Deputy President William Ruto on Tuesday 21, found himself in a rather awkward position after one of his allies kept confusing him with president Uhuru Kenyatta during a rally at Salama town, Kilome constituency in Makueni County.

Ruto addressed a mammoth crowd at Salama town, which is Kalanzo Musyoka’s backyard.

Things however didn’t go as planned after the DP handed former Kilome MP Regina Ndambuki the microphone to address the hyped crowd.

Regina, who recently confirmed that she will rally her troops with the DP, ditching Kalonzo’s Wiper Party in the process, left many in a state of total confusion after she kept calling Ruto “Uhuru” in her address.

READ ALSO: “I Failed To Protect You,” Sad Message From The Mother Of Kids Killed By Nakuru Doctor

She composed herself and started her speech again only to make the same mistake.

She did this three times angering the crowd in the process and eventually forced Ruto to take the mic from her.

Ruto had to calm the crowd assuring them that it was a UDA rally.

“Haya, sasa huyu mama wenu si mnamuelewa? Sisi watu wote ni wa Hustler nation na tunasema hii serikali ya mwaka ujao ni ya mahasla, na tuko pamoja – I hope you understand this your mom? We are all in hustler nation and we have said that this next government is for all hustlers. We are all together, ” Ruto said as the already irked crowd calmed down.